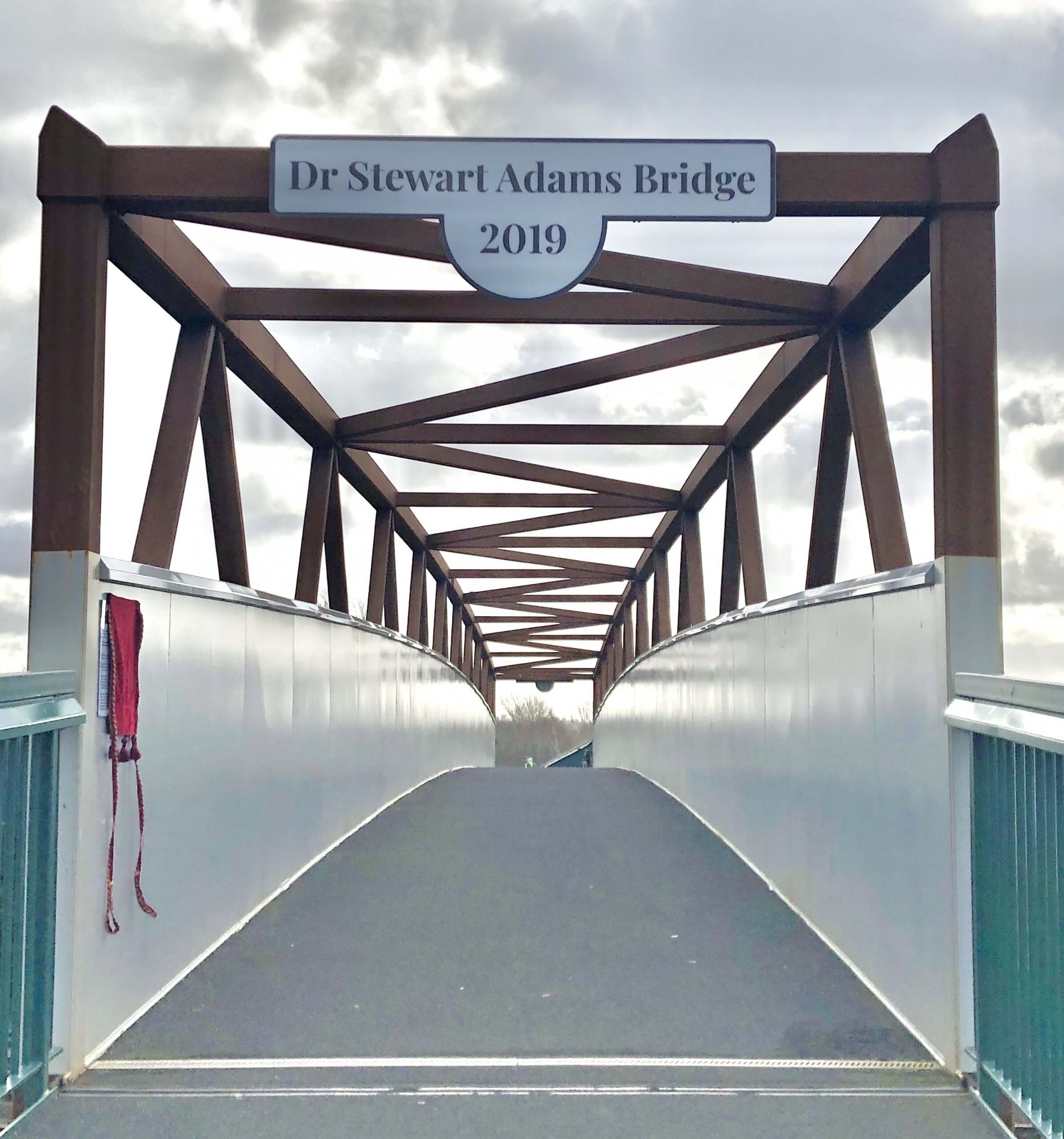 A pedestrian and cycle bridge on to the Boots site and Nottingham Enterprise Zone is to be officially named after one of its former employees who revolutionised global medicine.

The Dr Stewart Adams Bridge will be unveiled in honour of the Nottingham scientist whose pioneering work in the 1960s led to the discovery of ibuprofen.

The bridge opened a year ago on 8 March 2019 and is part of a wider path linking University Boulevard in Nottingham with the Boots site, the new Enterprise Zone and University of Nottingham campus.

It will now officially be named during a ceremony on Monday 9 March.

Dr Adams, a pharmacy graduate from the University of Nottingham, had a highly successful career at Boots which spanned almost half a century. On 3 February 1969, 16 years after he began working on it, Boots launched ibuprofen under the brand name Brufen as a prescription anti-rheumatic product.

Three years later, Dr Adams was promoted to Head of Biological Sciences and again to Head of Pharmaceutical Services in 1977, where he had responsibility for all chemical and biological research. He was appointed to the board of Boots International a year later.

In 1987, Dr Adams was awarded an OBE for his work on the project which discovered ibuprofen. The University of Nottingham gave him an honorary degree in 2008 and he was made a Freeman of the City of Nottingham five years later.

The pedestrian and cycle route – which includes the 50-metre bridge over the railway – connects a number of existing and planned major employment sites, linking Lenton and the Boots and Enterprise Zone sites directly with Nottingham Science Park and University Boulevard.

Led by Nottingham City Council, the £6.4m project was grant-funded by the D2N2 Local Enterprise Partnership and a planning contribution from Boots to upgrade pedestrian and cycle links between the city centre and the Boots site, part of the Nottingham Enterprise Zone.

Crossing the Midland Mainline, it also improves access to the University of Nottingham, the Queen’s Medical Centre, and existing cycle routes, such as the Western Cycle Corridor.

Councillor Adele Williams, Portfolio Holder for Local Transport at Nottingham City Council, said: “We were delighted to open the bridge last year. It has benefitted employers and staff by providing a quicker cycling route and more public transport options.

“We’re very proud to be able to officially name it after Dr Adams, who revolutionised medicine when his team discovered ibuprofen more than 50 years ago.

“This is now a common, over-the-counter drug found in family medicine cabinets across the world and widely used by healthcare professionals. His pioneering work in Nottingham has changed millions of people’s lives.” 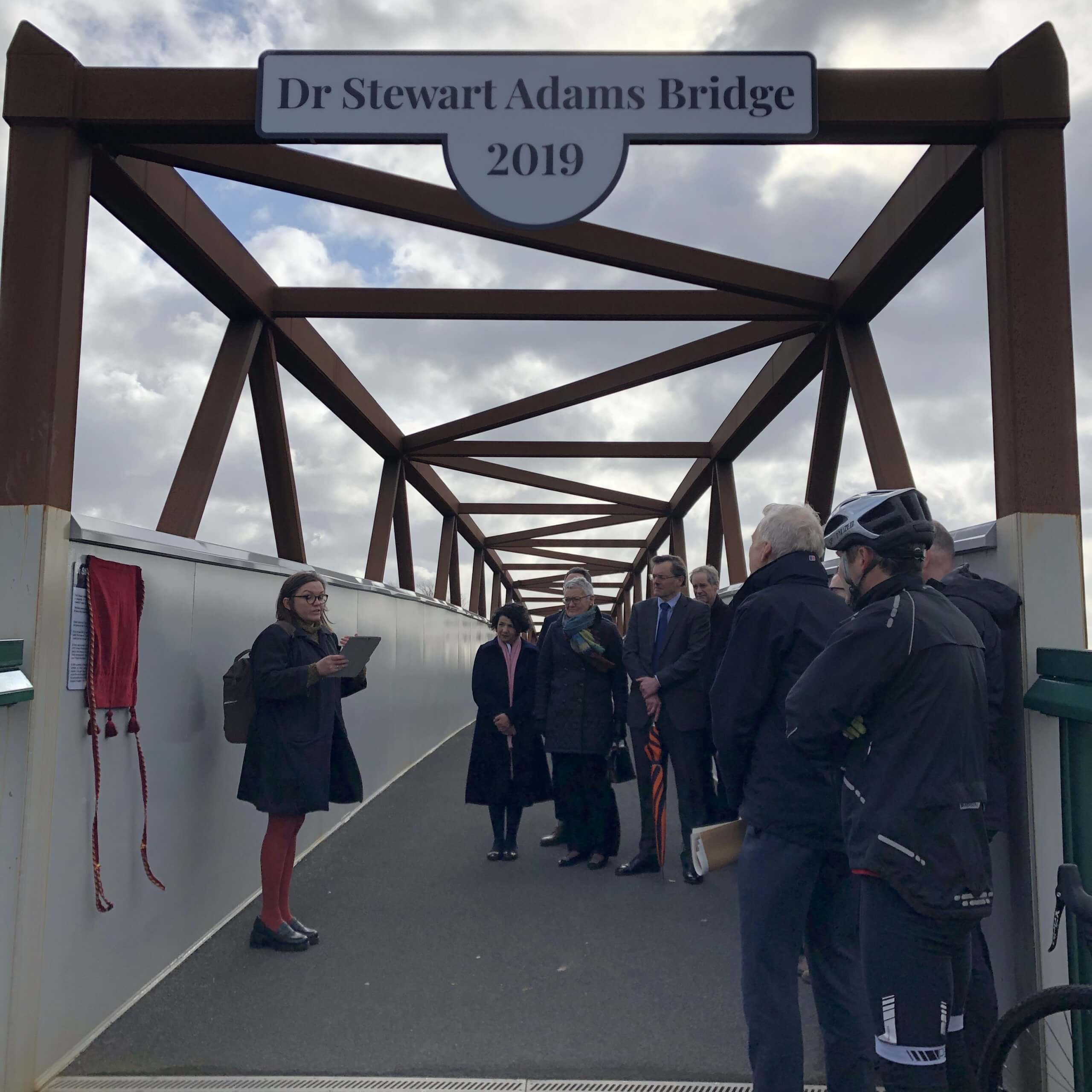 Mark Chivers, Director of Estates, Energy and Engineering at Boots UK, said, “We’re proud to be honouring Dr Stewart Adams and the incredible work he pioneered here at Boots.

“With this official naming ceremony and new plaque, we hope many more people will learn about Stewart Adams, his history and achievements. And we’re pleased too that the people of Nottingham can continue to benefit from the connections that this bridge enables.”

“This important relationship has endured and we were delighted to see the opening of this new bridge that provides a physical link between our two organisations.

“It is particularly fitting that the bridge will be named after Dr Stewart Adams who was a University of Nottingham alumnus, Boots’ most recognised scientist and a true Nottingham pioneer.”

D2N2 Chair, Elizabeth Fagan, said: “D2N2 is pleased to have been able to invest £6m into the construction of the Dr Stewart Adams Bridge alongside cycle and footpaths designed to promote sustainable transport across the Boots Enterprise Zone.

“Dr Adams is a fine example of our region’s innovative heritage and D2N2 is pleased to see him recognised in this way.”

Construction firm Eurovia employed Hucknall-based Briton’s Fabricators to build the bridge off-site, before it was lifted into place over six hours using one of the largest cranes in the country. The constructors used weathered steel to reduce future maintenance costs.

The footpath and cycleway runs from University Boulevard, along a road between the tennis centre and land earmarked for future science park developments, to Thane Road and the Beeston canal. 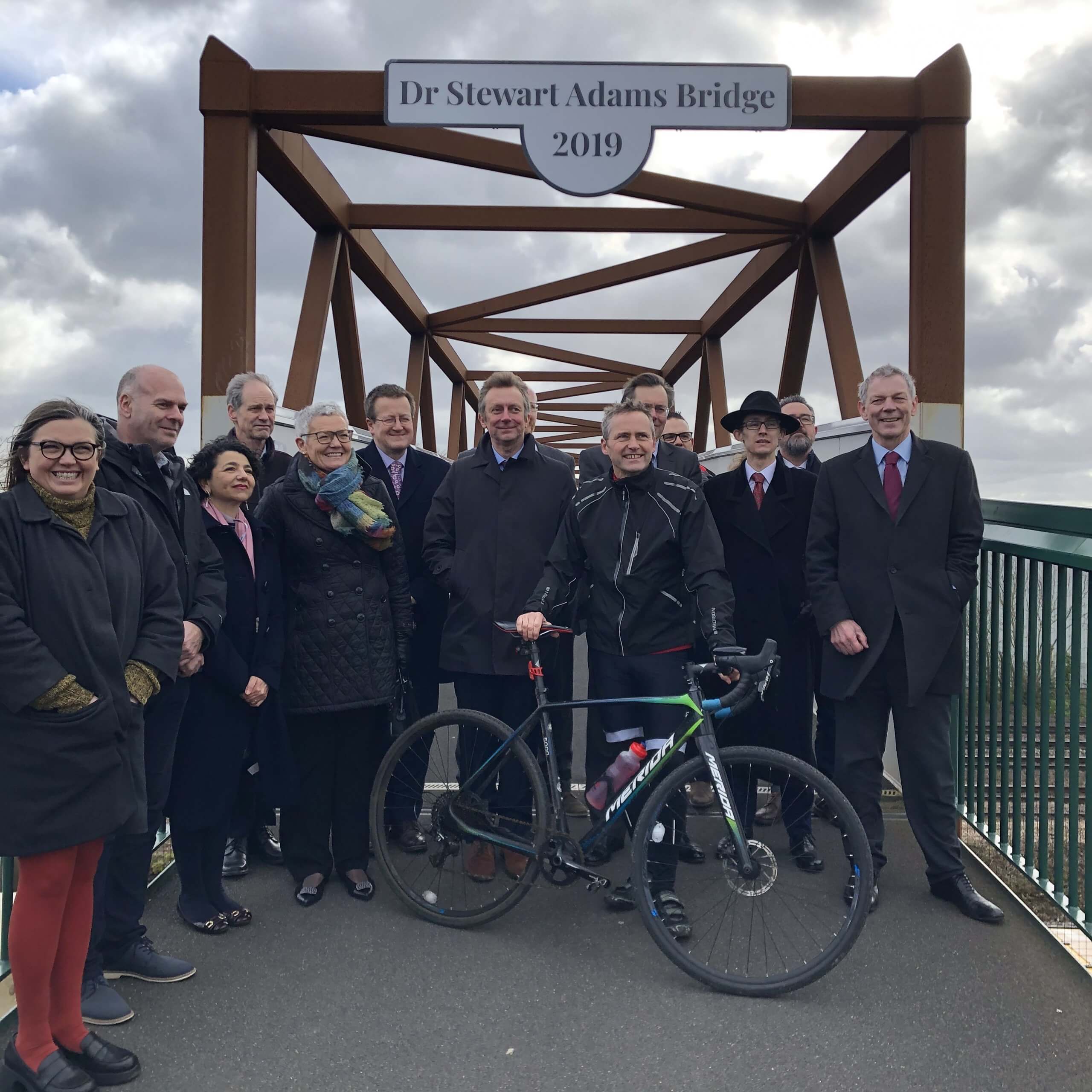