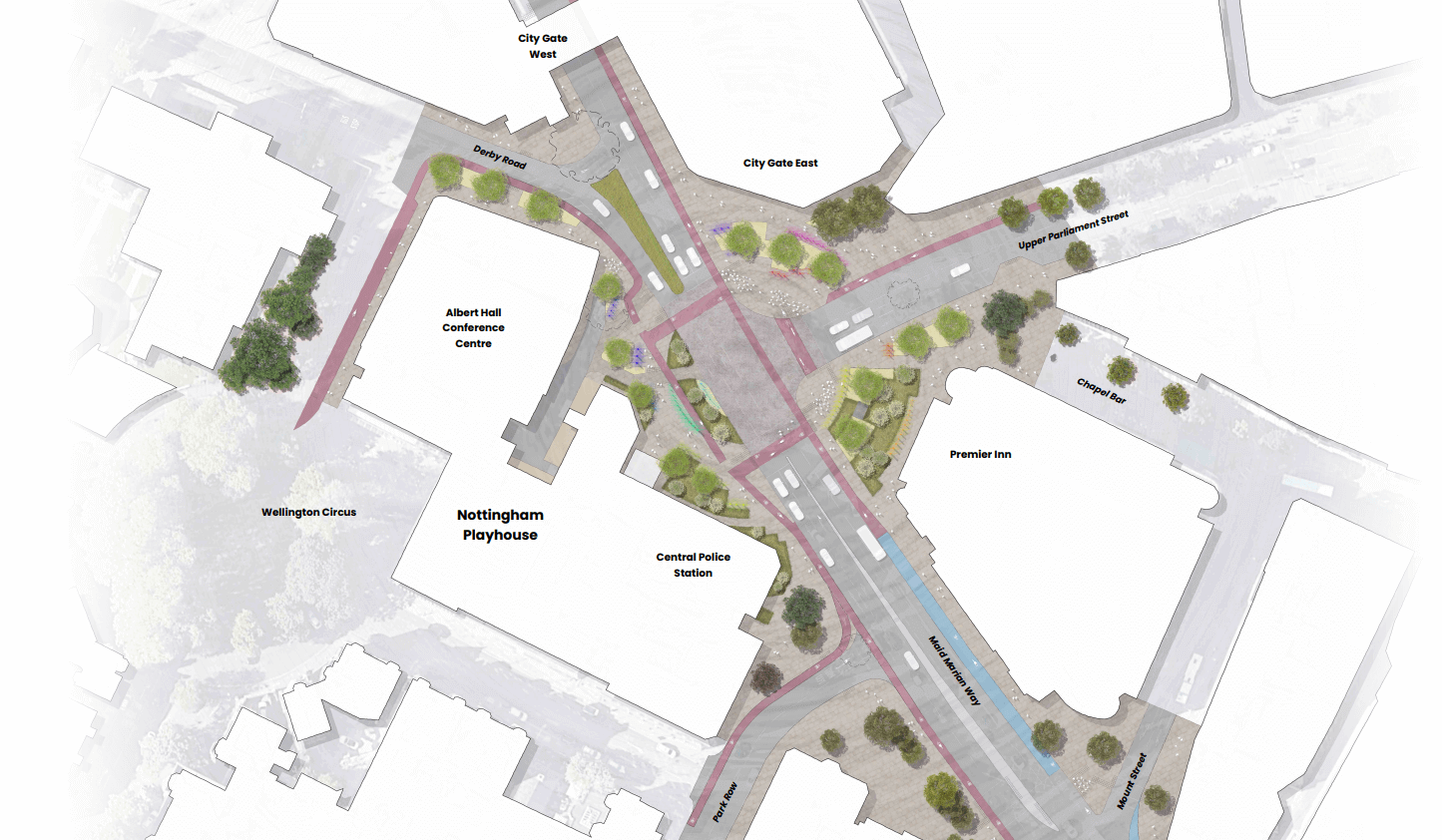 Update – A consultation survey has now taken place (the survey closed on Sunday 18 December). We will review the feedback and take it on board before we continue with the next phase of planning.

The scheme focuses on the northern end of the road and will also include changes to the junction with Mount Street.

Funding has been secured from the Government’s Future High Street Fund to improve connectivity within the city centre. By changing the highway layout, the aim is to give equal consideration to drivers, cyclists and pedestrians at the junction and provide additional green space on an important gateway into the city.

The existing roundabout layout can be more challenging for pedestrians and cyclists, while impacting on traffic between the city centre, Derby Road and the theatre/castle area to the west of Maid Marian Way.

The scheme seeks to replace the roundabout with a traffic light-controlled ‘T’ junction, incorporating pedestrian crossing points and improved cycle facilities. The current green space in the middle of the roundabout will be removed and instead areas of planting will be created around the edges of the new junction to create a more attractive space to walk through.

In addition, the junction of Mount Street and Maid Marian Way will be altered to make it simpler for pedestrians to cross the road.

Traffic heading south from the western (castle) side of Maid Marian Way currently has to turn left from Mount Street and U-turn at the roundabout. Under the proposals, traffic will be able to turn right from Mount Street which would make the journey simpler, shorter and reduce vehicle emissions. A new left turn will be opened on Park Row to allow traffic to head north on to Maid Marian Way.

We are now seeking the public’s views on the proposed changes. Comments received will be reviewed and considered to take forward into the detailed design phase. The landscape plans will be developed further and the aim is to undertake more engagement on these ideas along with options for public art early in 2023.

Nottingham City Council’s Portfolio Holder for Highways, Transport and Parks, Councillor Audra Wynter, said: “I’m pleased that we have secured this funding from the Future High Street Fund to regenerate the Maid Marian Way area and improve connections within the city centre. The work will make journeys safer and easier for pedestrians, cyclists and motorists and will create new green spaces for our city.

“I hope people will have their say on this important consultation so we can include this in the next phase of planning.”

Construction works could start in the summer of 2023 and are expected to be completed in 2024. Further information including scheme plans can be found here.