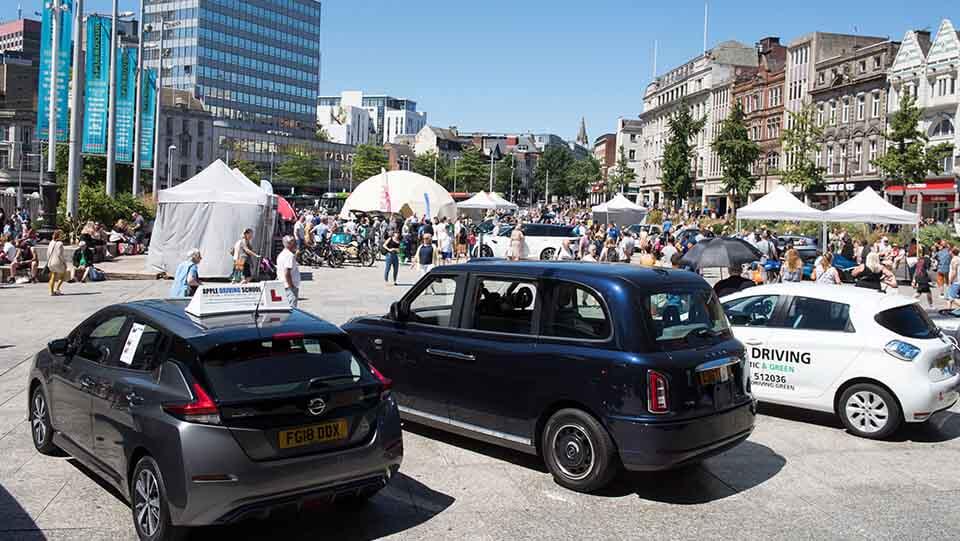 The last two days of June brought sunny skies and a volt of electric cars to the Old Market Square.

The Electric Vehicle FestEVal held by Nottingham City Council as part of the Go Ultra Low project aimed to show the breadth of EV technology from family friendly cars, to goods lorries, motorbikes and even a Formula E racing car!

Businesses and EV owners were on hand to talk about their experiences of owning an electric car, offering advice and myth busting common misconceptions. Including Councillor Sally Longford, Portfolio Holder for Energy and Environment – and an electric car owner herself – who said: “Electric cars are the future, and thanks to our Go Ultra Low programme in Nottingham we’re leading the way in supporting the uptake of electric vehicles.

“It’s still a relatively new technology, and I know people may be cautious and curious about how driving an electric car will be different, but it’s really encouraging to see how many people came down to Old Market Square to learn about EVs. Having made the switch myself, I wouldn’t go back!”

Local instructor ‘Love Driving’ explained that his running costs have dropped from £90 a week in petrol to £12 a week on electricity since he made the switch.

Nottingham City Council gave an update on the charging point project, which will see over 230 more charging points installed across Nottingham, Nottinghamshire, Derby and Derbyshire. On the Friday children from Scotholme Primary school were invited to build their own electric cars – to rival the Formula E model also on display. On Saturday, Fully Charged presenter and EV enthusiast Robert Llewellyn wryly dubbed ‘the second most influential person in the EV world after Elon Musk’ recounted his Electric Adventures, and a few positive words for Nottingham. “All day I’ve been learning about what you’re doing here in Nottingham, which is unbelievable – it’s so exciting to see a city taking this so seriously. I hope other cities will come and see what you’re doing here in to promote EVs, because it’s so important.”

“There’s a huge amount of ignorance of the technology. People don’t understand that there is an alternative to petrol and diesel so it’s a process of education and increasing understanding of the economic benefits.”

Jesse Norman, the Government’s Minister for Electric Vehicles, said: “Nottingham is becoming a great example of how to support the uptake of ultra low emission vehicles. The government awarded £6m to the city in 2016 to boost local infrastructure and launch pioneering initiatives. This funding and Nottingham’s commitment has paid off and it is very encouraging to see its progress.”

Interested in making the switch? Find out more about our Go Ultra Low programme.