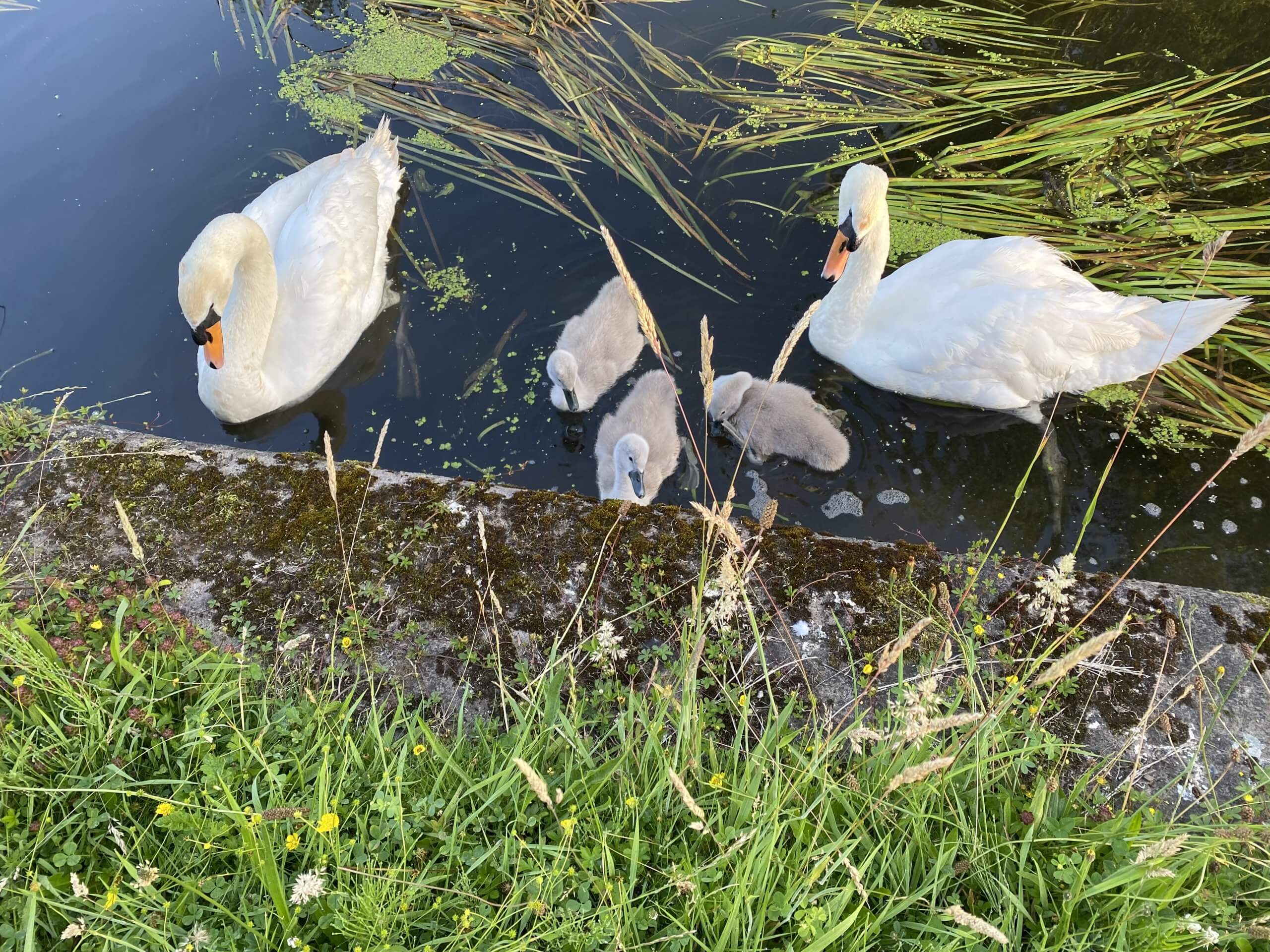 Councillor Rosemary Healy took over the Portfolio for Highways and Transport in May. Since then, she’s been getting to grips with Nottingham’s cycle network, getting miles under her belt on an electric bike.

In a series of blogs, we’ll be sharing her experiences of the city’s cycling network, including thoughts on what’s working well, areas for improvement, and how the council’s Transforming Cities funding will help to build an even more connected cycle network in Nottingham.

This month, Cllr Healy shares her experiences of being a new cyclist in Nottingham, including a couple of suggested routes to build confidence and enjoy the city this summer. 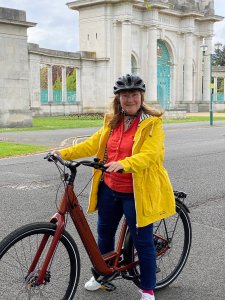 As a council, we’re trying to encourage people to take up cycling, and to cycle more, and how can I ask anyone to do that without trying it for myself?

Until a few months ago, I hadn’t really cycled much since my teens, and wasn’t sure it was for me. Do people take up cycling at my age? Well, why not?! Being very aware of the benefits of sustainable travel, there was no better time to get back in the saddle.

As a beginner, for my first couple of journeys we planned routes that involved good cycle paths. I would recommend these to others getting started – and anyone who just wants to enjoy lovely scenery! These routes are mostly level, with wide paths and lots of interesting things to see.

The summer holidays are a great time to start getting out for those, like me, who need to build their confidence, or want routes the whole family can enjoy. The roads are generally quieter and the longer daylight hours mean you can take your time.

Notes from my first journeys:

So far, I have cycled to West Bridgford, Attenborough Nature Reserve, Long Eaton and Wollaton Park, following mostly the Big Track and Cycle Route 6 out from the city centre. Nottingham is so lucky to have such beautiful scenes so easily reached from the city. Following the canals and rivers with nice wide tracks is a wonderful opportunity to enjoy natural surroundings.

Suggested route – city centre to Holme Pierrepont and back

Start at the station in Nottingham, cross Carrington Street and turn left past Unity Square and the Castle Rock brewery (useful on the return journey!)

Cross using the toucan cycle crossing, following next to the tram route along Queens Walk until you reach the Wilford Toll Bridge. Here, turn left, cross the tram lines, and go through the gates to the Embankment.

Continue along with the river on your right. There is a wonderful park with children’s play area, including little roads and traffic light for children, and a playground, with a coffee kiosk next door.

Next is the Memorial Gardens, where you turn right over the suspension bridge, then take a left and follow the path, with the river on your left, past County Hall and under Trent Bridge. If you go up to the road there are bars and restaurants nearby for refreshments.

From Trent Bridge cycle under the edge of the stadium of Nottingham Forest Football Club and past some rowing boat clubs.

Keep on following the path under Lady Bay bridge and you’ll suddenly find yourselves out in the countryside, riding through fields. There are signposts for National Cycle Route 15 off to the right if you want to explore. Otherwise stay close to the river, going through fields. It’s a great place for a picnic.

Continue to Nottingham Sailing Club, where we dismounted and took advantage of one of several benches looking across the river to Colwick Park, before returning the same way. Although you could turn right and right again onto Adbolton Lane to join Cycle Route 15 and the river again. 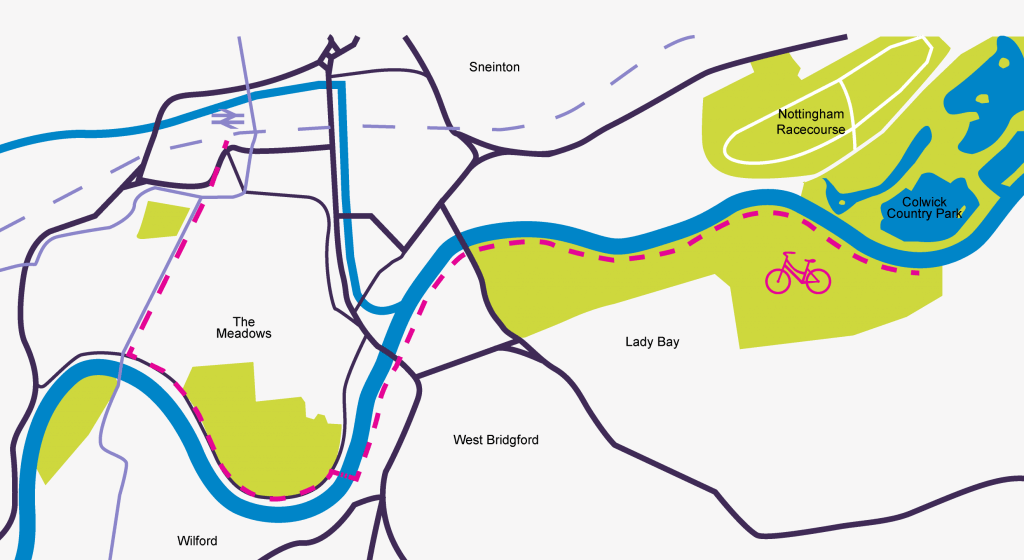 Suggested route – city centre to Beeston Lock and back

A longer and slightly more challenging ride to Beeston Lock, which rewards you with many varied waterside scenes, overlooked by attractive tea rooms and pubs. 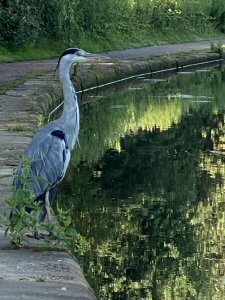 Start at Nottingham Station, cross Carrington Street and descend the slope toward the Justice Centre by the canal. Carry on with the canal on your right, under the bridge at Wilford Street and past Castle Lock.

Keep following the path past Castle Marina, where there are several pubs and restaurants. You go under a railway bridge and past Trevithick Boat Yard, and keep going until you reach Beeston Lock, which is around 7km. 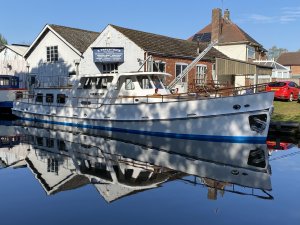 Just beyond Beeston Lock is Beeston Marina where there is a tearoom – including excellent gluten-free selection – and a pub. Here you can choose two routes: 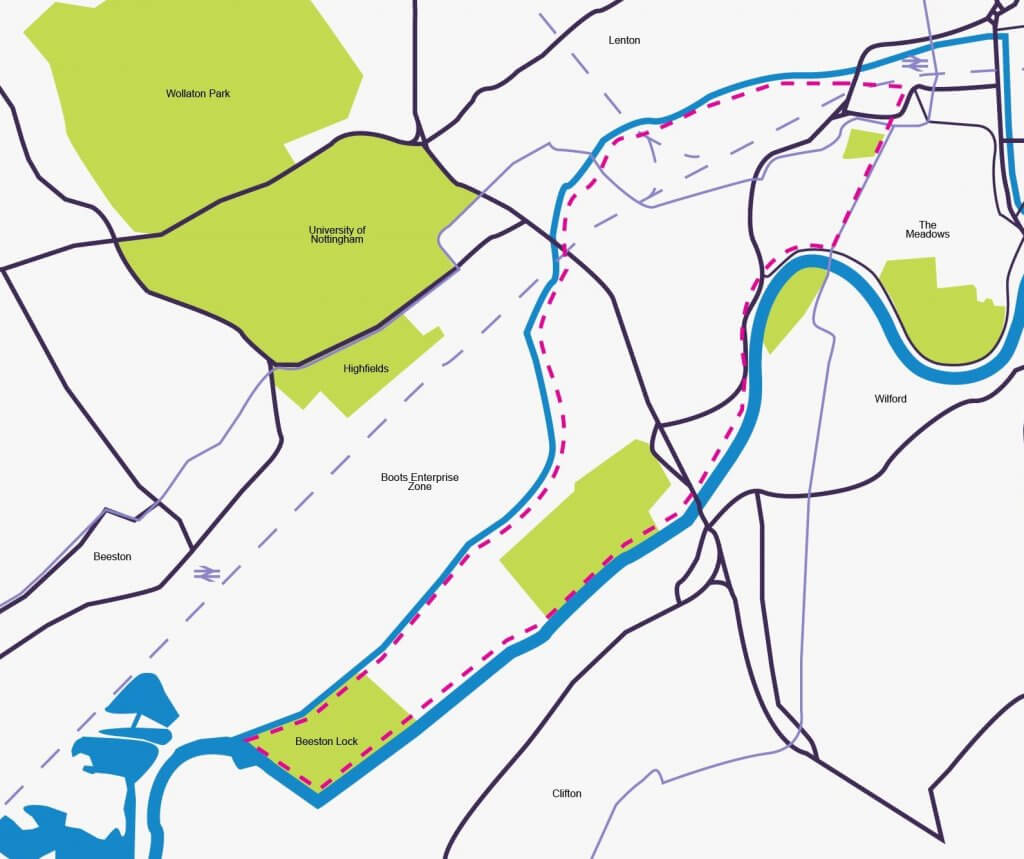 To discover more routes, and to create your own, check out the Nottingham Cycle Map. This includes all the routes mentioned above, and the paper version also features detailed maps of the Big Track (a ten mile circular route via the river and canal between Beeston Lock and Trent Bridge) and Erewash Trail. You can email us to receive a paper copy.