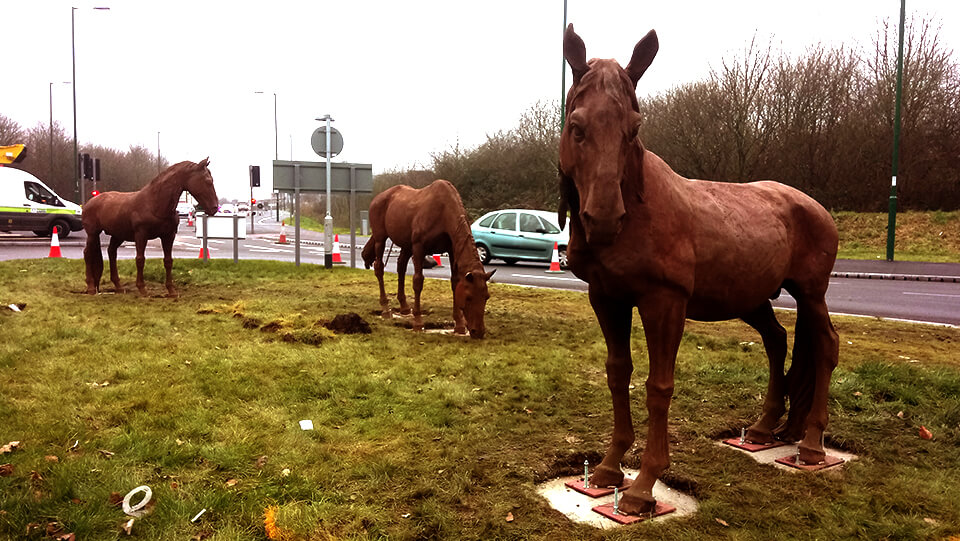 Three cast iron horse sculptures have been installed on a busy roundabout that has recently been improved for the benefit of cars, cyclists and pedestrians.

Known as the Racecourse Roundabout, a series of improvements have been made as part of the Daleside Road Improvement Scheme, includinstrians and cyclists.

The sculptures, installed on Friday, January 12, have been funded by the Racecourse, with a contribution from Nottingham City Council as part of public realm enhancements.

James Knox, General Manager of The Jockey Club’s Nottingham Racecourse, said: “To access the racecourse our visitors have to use this roundabout, and we’re pleased to see these alterations, which will make it better for everyone to use.

“The idea behind the horse sculptures is to give a bit of character to this well-known and well-used roundabout, connected to the identity of the racecourse and recognising its significance.”

The sculptures are cast in iron with hand finished detailing and a natural rust finish. As the metal ages, each sculpture will develop its own, unique patina – a layer that forms on metal due to exposure.

“We’ve also taken the opportunity to alter the layout of the Racecourse Roundabout to improve traffic flow, and to repair parts of the road that had started to deteriorate.

“We’re grateful for the patience and co-operation of all road users and the businesses along the route while work has been ongoing. The racecourse has been at Colwick Park for more than 100 years, and these sculptures are a fitting way to celebrate that history.

“We’re fortunate to have a well-regarded racecourse, and this was an ideal opportunity to do something to support that. I’d like to thank The Jockey Club for their willingness to help us improve this gateway to the city.”

Works began on Daleside Road in October 2016 and are due to be completed in March. The scheme includes new bus and cycle routes and is aimed at reducing emissions and improving air quality on a key route into the city. Electric buses began running along the route in January 2017, and biogas buses have since been introduced.

Project officers from the City Council have met regularly with staff from the racecourse and greyhound track to keep them informed of works on the road and to minimise disruption during key events.

Not how horses usually arrive at Nottingham Racecourse!