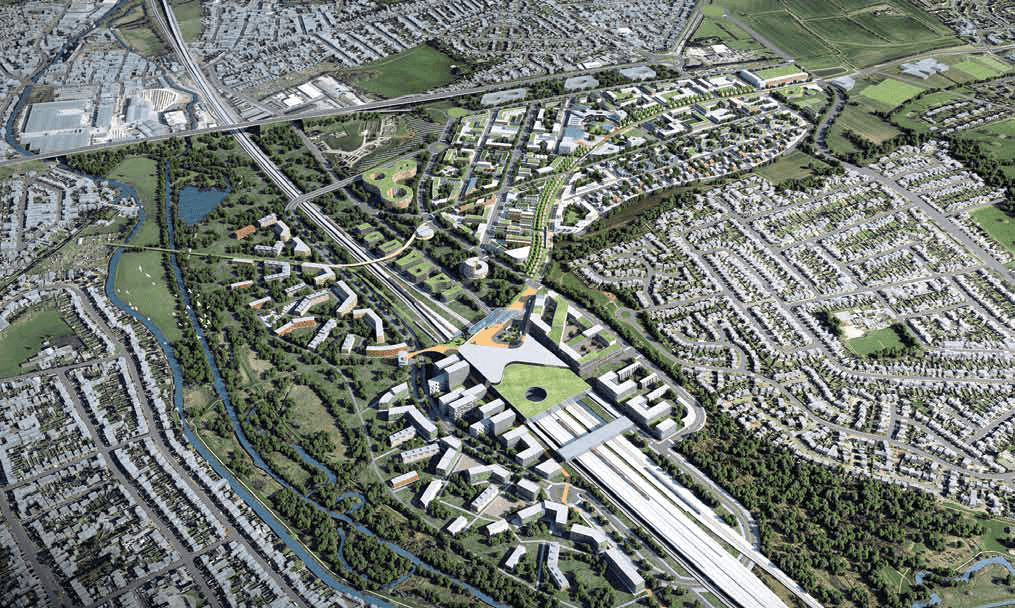 Published on Thursday, January 24th, 2019 at 8:00 am in National project, Public Transport, Train

Midlands Connect, Midlands Engine, Northern Powerhouse Partnership and Core Cities UK are urging Theresa May, Jeremy Corbyn, Vince Cable and Nicola Sturgeon to offer their unwavering support to the project, explaining it is the only way to ensure the country benefits fully from a once-in-a-generation opportunity to drive regional economic growth and rebalance the economy.

Delivering HS2 in full will connect eight of the UK’s ten biggest cities, and once integrated with crucial upgrades to the existing rail network, including the Midlands Rail Hub and Northern Powerhouse Rail, all ten cities will benefit from a step-change in rail connectivity.

“HS2 Phase Two will extend the benefits of this vital piece of infrastructure to more than 25 million people – over a third of the UK’s population – across the East Midlands, the North and Scotland.  These people and places should not be denied the job and growth opportunities that HS2 brings. It must continue beyond Birmingham.

“Our support must not flounder or stall.  We must unite to deliver HS2 in full, and we urge you to join us by offering your vocal and unwavering support. Help make HS2 happen for everyone, and help us all achieve our full potential.

“To our party leaders we say – back it, build it, benefit from it.” 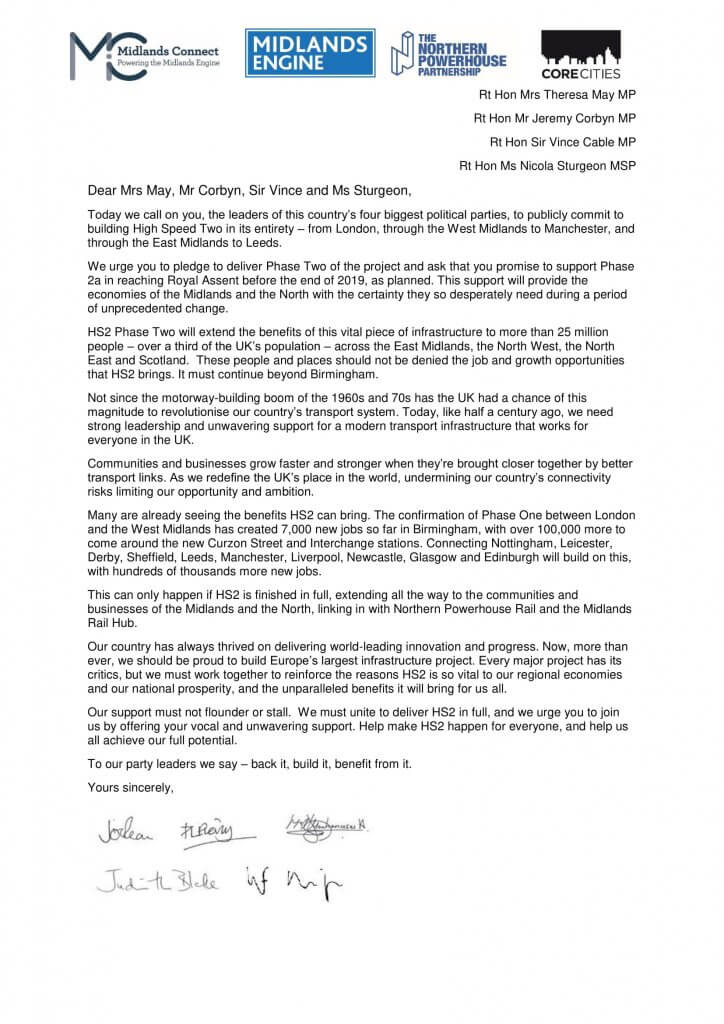 The East Midlands Hub station at Toton is expected to generate £4 billion a year for the East Midlands economy and generate 74,000 new jobs. In October 2018, the government pledged to create a locally-led development body to maximise the benefits of HS2.

The open letter comes as MPs, business and civic leaders from the East Midlands are uniting with others from across the country today (Thursday 24 January) for a parliamentary reception at Westminster to intensify their unequivocal support for HS2. The event will be chaired by Lilian Greenwood, MP for Nottingham South and Chair of the Transport Committee, and attended by Allan Cook in his first public engagement as Chairman of HS2.

Councillor Collins said: “HS2 is hugely important to the region as a driver to create jobs, growth and business opportunities. Recent Treasury statistics revealed that last year the East Midlands received less public funding on transport per head than anywhere else in the country. In London, the spending per head was four times as much.

“This is an opportunity to help rebalance the national economy through improved infrastructure, better connecting the north, south and the Midlands. Now more than ever we need reassurance that all parties are committed to investing in the future of our region.”

Sir John Peace, Chairman of Midlands Connect and Midlands Engine, has signed the letter and said: “The Midlands and the North are uniting behind HS2, promoting the short and long term benefits and answering the project’s critics to make sure it goes ahead in full.  Securing unequivocal, cross-party support to deliver HS2 in its entirety is essential to the economic futures of the Midlands and the North. The East Midlands alone stands to create 74,000 new jobs as a result of HS2; reaffirming the promise of this investment will catalyse growth and business confidence during a crucial transitional period for the country. We can’t afford to let this opportunity slip through our fingers.”

Karen Smart, Managing Director of East Midlands Airport, added: “HS2 will be the step-change that the East Midlands needs to be able to compete with other areas of the UK for inward investment and business growth. This, in turn, will lead to greater job creation, new housing and communities, and improved quality of life for people living and working in the region. Alongside other key transport assets such as the airport, which has capacity to grow, and the East Midlands Gateway, HS2 will further enhance the region’s connectivity making it one of the most convenient parts of the UK to visit, work and live.” 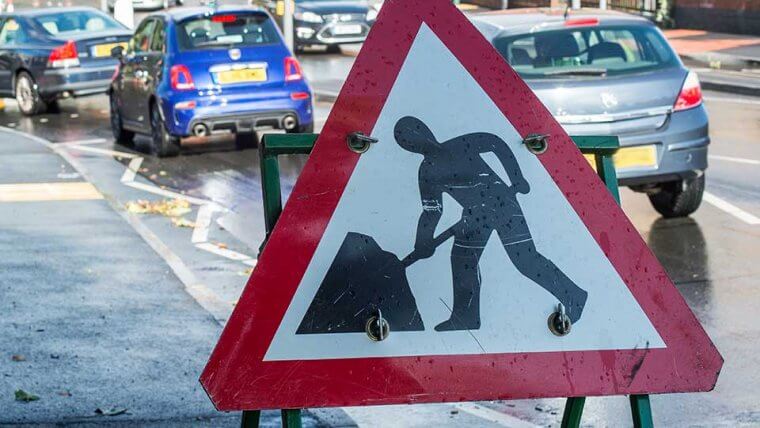 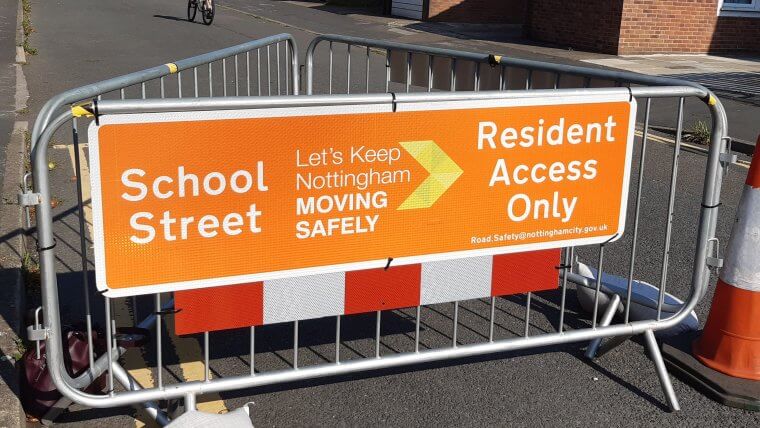 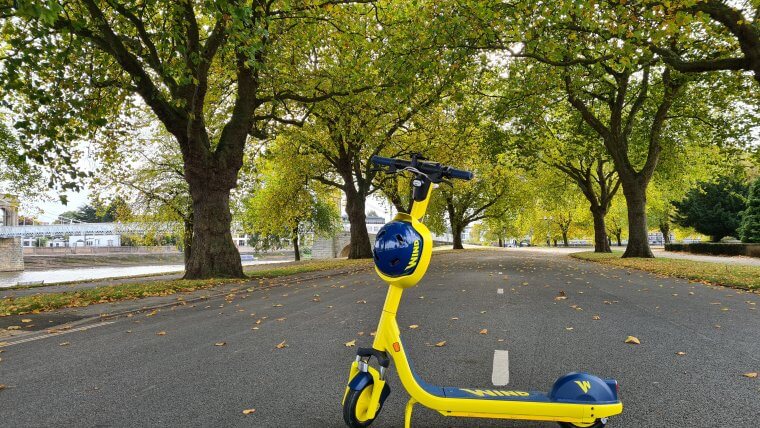