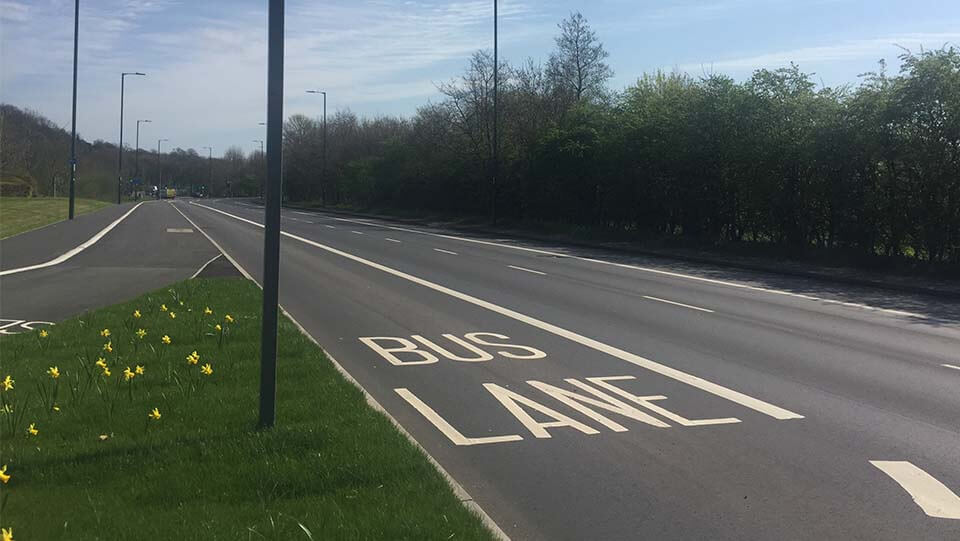 Bus lanes, bus access roads, and traffic light priority have been introduced to make sure that your bus journeys are as quick and easy as you would expect them to be.

A full double decker bus can carry up to 80 people and only takes up the same amount of road space as two cars so buses are one of the most effective ways of moving people. This why bus lanes are important as they help move large numbers of people around the city without causing tail backs.

Routes are chosen that have a high volume of bus traffic, usually on major roads into the city. This then takes the buses out of the main flow of traffic allowing them to zoom past the queues.

Mansfield Road is a great example of how this works is practice. In the morning rush hour (between 7.30-9.30am) buses make up just 5% of the traffic but carry 48% of the people. Plus over 80% of the cars on their journey in are only carrying one person, so it’s a very inefficient use of the road. 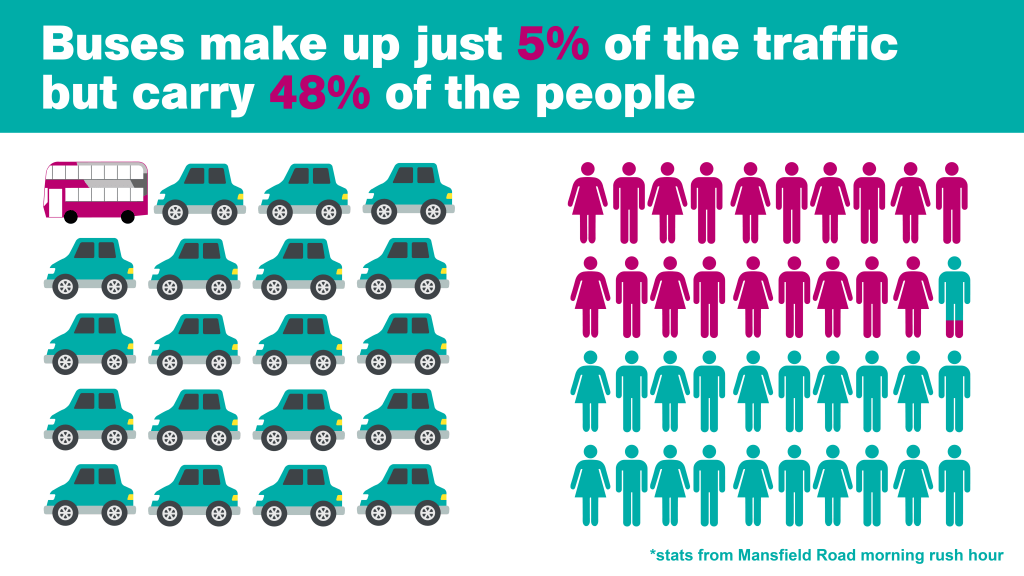 Bus lanes are enforced using a network of cameras, so they can be kept clear of parked cars and other traffic. The money from penalty charge notices is used to cover the cost of the enforcement process or for other traffic initiatives.

In places where we aren’t able to install separate, segregated cycle paths, bus lanes can also provide a safer space for cyclists – as there are fewer vehicles allowed in the lane during the hours of operation.

Bus lanes are also useful for emergency services, which make it easier for their vehicles to negotiate traffic – particularly at peak times on congested routes.

More than a bus lane

Nottingham is trialling innovative new ways of using bus lanes, such as the route along Daleside Road towards Colwick. First and foremost, this if for buses but it’s also the first lane in the country that also allows Ultra Low Emission Vehicles or ULEVs to drive in it too. This is part of a wide range of air quality measures across the city, aimed at encouraging more people to switch to cleaner vehicles.

Before the renovation of Nottingham Station Carrington Street was a through road for traffic around the city. Since the transformation, most traffic is now diverted around the station via the southern relief route, meaning that buses have priority and can drop people right outside the door – to continue their journeys on the tram or train. When the new Broadmarsh bus station is complete, the Carrington Street ‘bus only’ zone will be extended onto to Canal street – so buses can have priority access into the new bus station.

Bus priority given the green light

We’ve recently received funding from the Department for Transport to help make bus travel even more efficient. We will be upgrading the equipment in the traffic signals and our control centre to allow for bus priority junctions. These will be able to adapt the signals in real time so lights will turn green when buses approach to help buses keep to time and get back on track if there has been a delay – providing quicker, more reliable bus journeys making this an even more attractive alternative to driving.