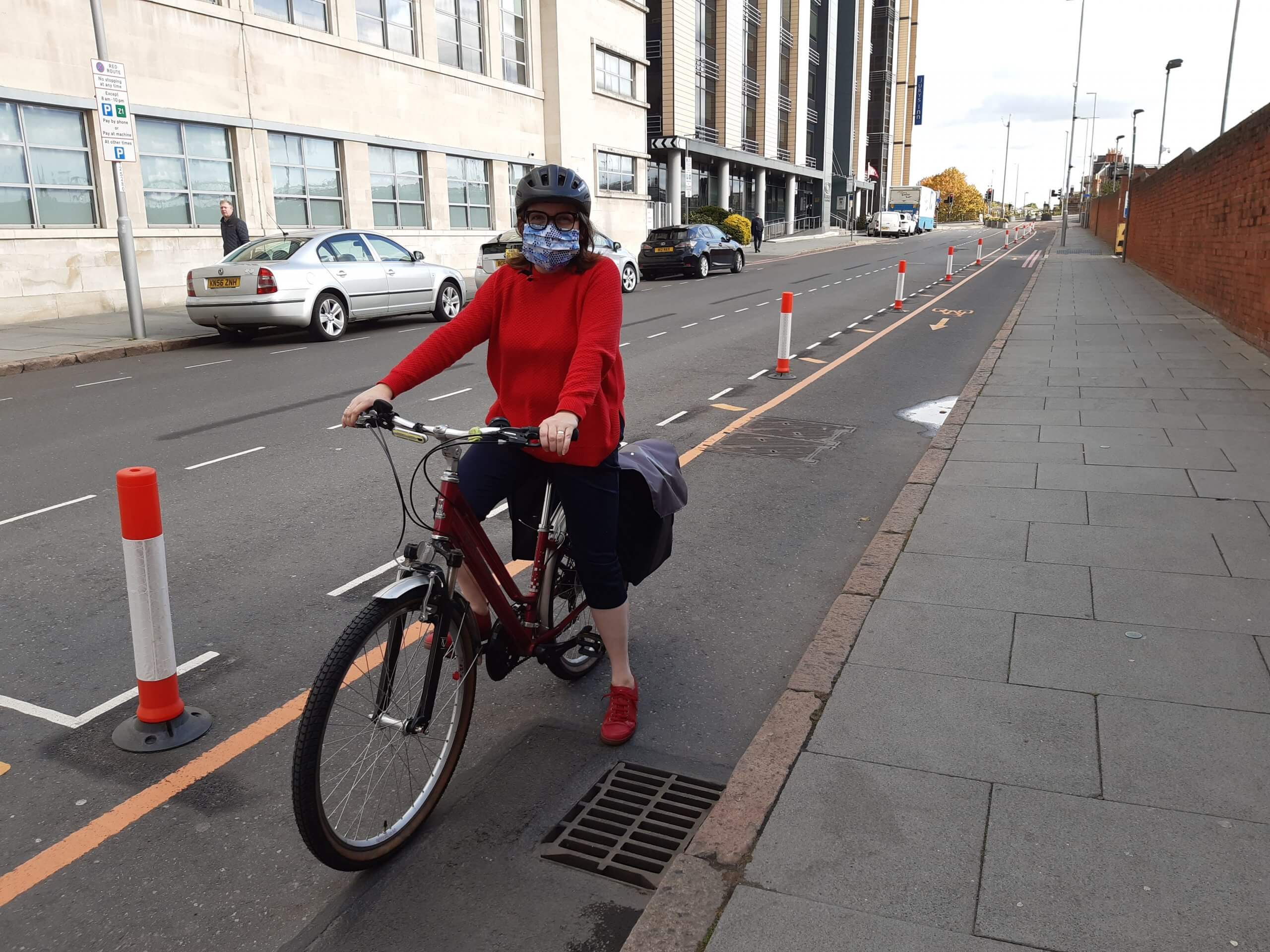 A range of pop up cycle lanes, street closures and cycle parking facilities have been put in place across the city to encourage more active travel during the covid-19 pandemic.

The last cycle route, funded through Nottingham City Council’s Emergency Active Travel Fund, is being installed in the Carlton Road area this week.

The measures aim to support social distancing by making it easier for people to walk and cycle, and to deter cut-through driving.

The latest cycle route is being installed as new ‘High’ level restrictions are introduced by the Government in Nottingham and Nottinghamshire, including advice to reduce the number of journeys people are making, if necessary walking or cycling, or avoiding busy times and routes on public transport where possible.

Councillor Adele Williams, Portfolio Holder for Transport, said: “Our pop up cycle lanes have focused on developing new and improved cycling corridors on key routes in the north and east of the city.

“We’ve also introduced two low traffic neighbourhoods, in the Arboretum and Derby Road areas, to deter motorists using these residential areas a cut-through and, by doing so, create a more inviting environment, and more space, for people to walk or ride a bike.

“These measures are all about keeping Nottingham moving safely, by encouraging more active travel and reducing demand on public transport while social distancing guidelines are in place.

“We are monitoring all these schemes and inviting residents, businesses and road users to let us know what they think.”

The following trial cycle lanes are now signed and lined with easy to spot orange paint, and most of the routes are segregated to some degree. In some locations this hasn’t been possible, due to access required to bus stops, or driveways, or due to impact on public transport.

Hucknall Road – An important corridor connecting the City Hospital and ring road. This is the trial phase of a proposed longer route.

St Ann’s Wells Road – Cycle lane, with some segregation and improved pedestrian crossing opportunities, and more space for cycling and pedestrians. A permanent scheme is now being considered.

Carlton Road– We’re creating a quieter route away from this busy road, ideal for less confident cyclists, linking Porchester Road to the city centre including a new temporary pedestrian crossing. Plans are also being developed for a more permanent solution for the whole of Carlton Road and Porchester Road.

Station Street/Canal Street – A segregated route through the city centre connecting the various routes into and out of the city in all directions.

Oundle Drive – Improvements to existing facilities on Middleton Boulevard/Oundle Drive, where the layout is hindered by poor visibility and footway width. We’ve moved cyclists off the shared path and onto a dedicated two way cycle lane set back from residential entrances for safety. We are looking to put in an enhanced permanent facility following discussions with residents.

In addition, the council has installed several pop up cycle parking racks in the city centre and at locations including Colwick Park, Forest Recreation Ground and Victoria Embankment, while security improvements have been made at the permanent cycle hubs at Clifton South and Toton Lane park and ride sites.

These are the latest emergency active travel scheme measures to be put in place, following the closure to through traffic of Victoria Embankment at the beginning of August, and the creation of car-free streets outside eight schools in the city in September.

The fund has also been used to support the provision of bikes to more than 160 jobseekers, and to run pop up Dr Bike sessions.

Find out more information and comment on any of the schemes here.

The City Council is also inviting suggestions from residents on further areas for improvement. This can be done at the Let’s Keep Nottingham Moving Safely