Due to water damage and corrosion to steelwork on Clifton Bridge (A52), Highways England has closed the bridge outbound (East) with only one lane in operation.

Head of service delivery at Highways England, Adrian Oulds, said: “Safety is always our top priority and we’ve taken the decision to close the road while we carry out further tests on the defect which we have found underneath the road.

“The structure itself remains safe but we’ve taken this decision to close the road eastbound to traffic while specialist investigations take place. Once these checks have been completed and we’re confident we can reopen the road, we will do so at the earliest opportunity.”

A programme of repair work has been drawn up which is likely to see limited lanes running eastbound for the remainder of the year. While it may not always be visible, work is being done; at present, engineers are working in ‘hollow’ boxes beneath the road to carry out further checks of damage to the steel and concrete.

For two weeks starting 2 March all Eastbound lanes will be closed overnight from 10pm – 6am. This is to allow Highways England to carry out works that will allow a second Eastbound lane to be opened. 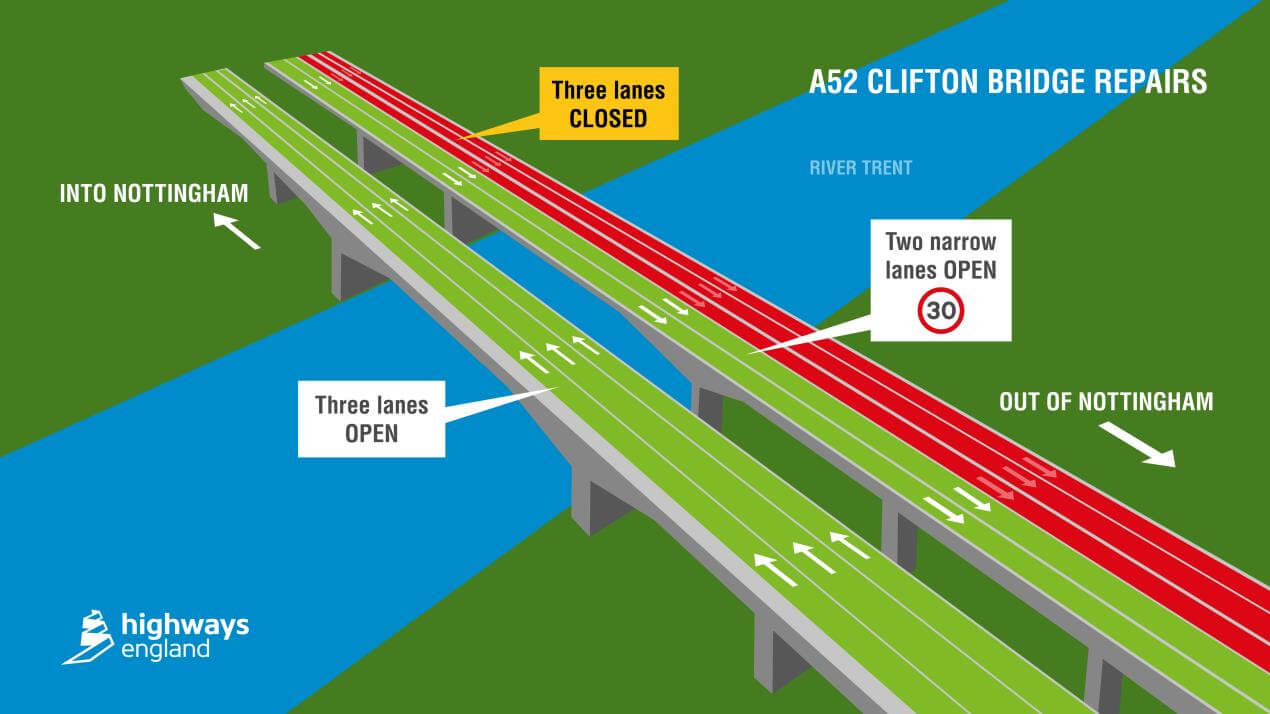 A second lane temporarily opened under a 3.5 tonne weight restriction, however was closed shortly after. This lane remains closed.

How will this affect traffic?

This is causing severe delays across the road network in Nottingham as drivers seek alternative routes. Highways England and Nottingham City Council are advising anyone driving around the city to leave plenty of time for their journeys and use public transport/Park & Ride where possible.

It is also advised that where possible traveling at peak times should be avoided.

What are we doing?

The council’s traffic team is in constant contact with Highways England about the progress of the work on Clifton Bridge – the busiest road in the city – and any measures that can be put in place to improve access. As of Wednesday 12 February, Highways England has reopened one lane Eastbound. All Westbound lanes are operational.

Other measures being taken include:

Steps are also being taken to ensure buses and trams can keep moving during rush hour on the key public transport routes south of Nottingham railway station. With the support of Nottinghamshire Police, a number of temporary road closures will come into force later today to improve public transport links including at Meadows Way West junction with Queens Drive, Sheriffs Way junction with Meadows Way and Crocus Street junction with Sheriffs Way. The measures will be kept under review

The diversion route for the eastbound closure is as follows:

Essential works to begin in preparation for Broadmarsh

Widening and resurfacing the path on Western Boulevard