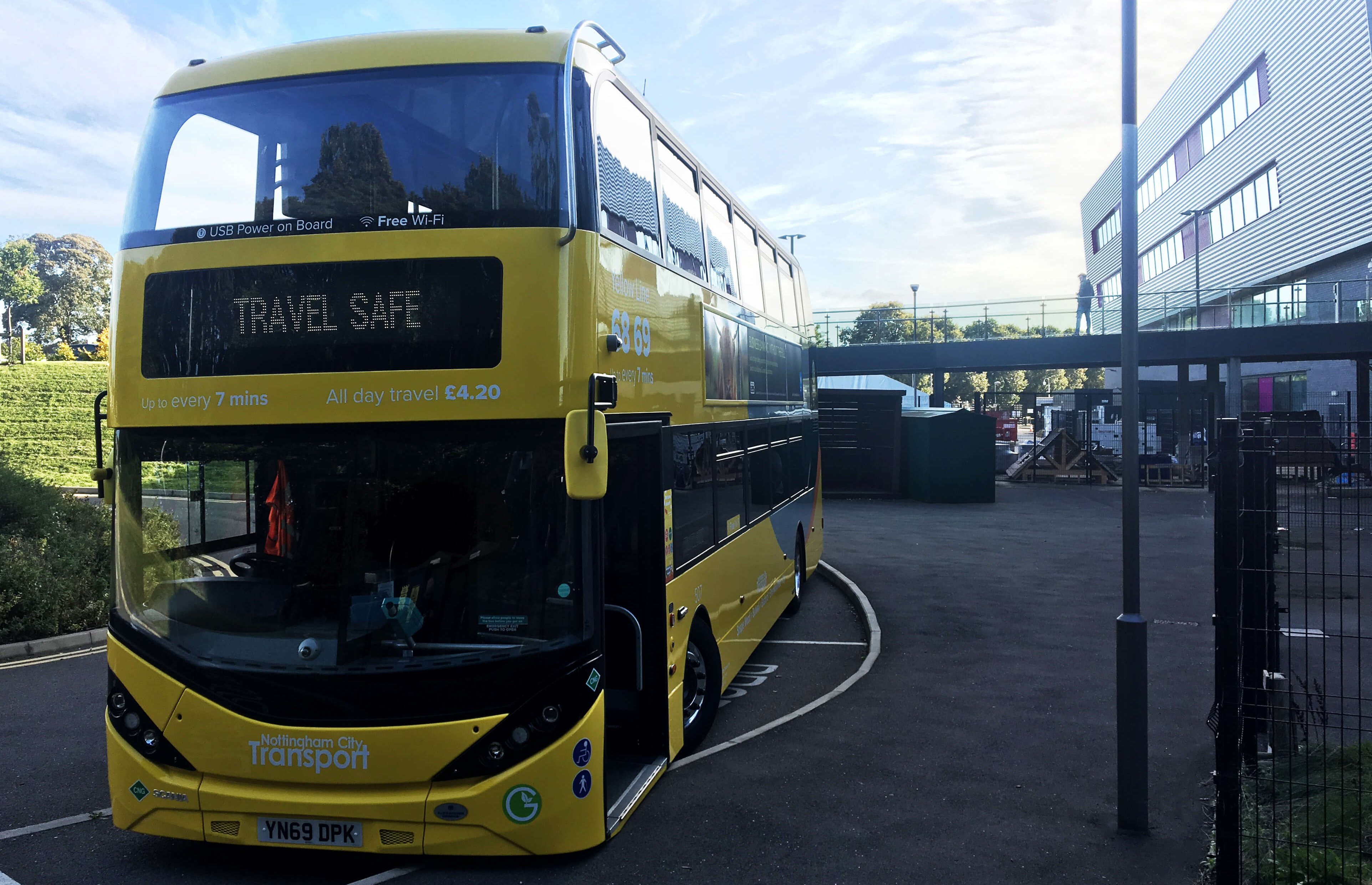 Everyone deserves to have equal opportunities when it comes to accessing public transport. That’s why in Nottingham, we like to do the best we can to make sure that everyone feels safe and confident enough to use the public transport that the city has to offer. This makes days like “try a bus day” even more important to our citizens living with disabilities, and why this event proved very popular.

On Thursday 10 October, we hosted ‘try a bus day’ with help from Nottingham City Transport (NCT).

During the day, NCT accompanied us in a new biogas bus to travel to groups across the city. The bus was so new that it had not even entered into service yet! Among those who attended were students from Nottingham College and groups from My Sight Nottinghamshire and Mencap.

Each group that attended the ‘try a bus day’ event were able to engage in a session led by NCT and council officers. The colleagues from NCT also deliver Disability Awareness training to bus drivers. These sessions lasted 30 minutes and taught valuable skills to the groups as well as providing them with the opportunity to ask whatever questions they had. The groups were able to gain the much-needed confidence to allow them to use Nottingham’s buses independently.

Students from Nottingham College in Basford

The first session was held in Basford at Nottingham College. Here, we met up with three groups of students. During their session, they learned all about how to board the bus safely, how to buy a ticket or use their smartcards, and how to know what stop to get off at. The students had some concerns about feeling safe whilst on the bus, and they were reassured that the buses are fitted with CCTV cameras and that they can speak to the driver if they have any concerns. Some students had reservations about speaking with the drivers, due to negative experiences, but they were reassured that sometimes bus drivers can have bad days too but that a majority of the time, they would be more than happy to help.

They also had plenty of questions about the real time signs, how environmentally friendly the buses were, and how long it takes to become a bus driver. The students were also offered the opportunity to sit in the driver’s seats for photos, and even got to issue their own bus tickets – including the ‘rover’ ticket that was very popular! 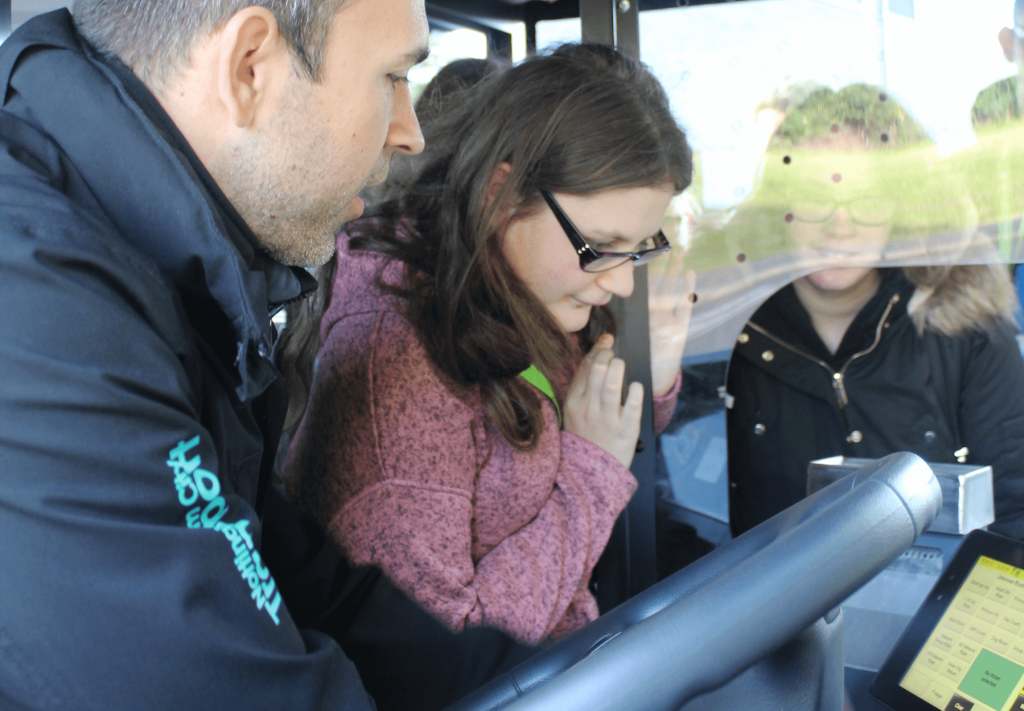 A group from My Sight Nottinghamshire

The yellow biogas bus then travelled back into the city centre, where it stopped in Hockley. We were then joined by a group from My Sight Nottinghamshire, people who live with visual impairments. The group from My Sight Nottinghamshire took turns boarding the bus safely and locating a seat. Once they were all sat down, the group had plenty of questions to ask and concerns that they wished to voice.

Attention was also brought to bus drivers not stopping for them because they were unable to hold their hand out in time. The NCT trainers informed the group that the drivers are told to stop for every person who has a guide dog or white cane. They then reassured the group that this would be reiterated. They were also told of available assistance cards, including bus stop cards that have a large number on a bright background so that they drivers can see and stop when appropriate.

On their way off the bus, the group were talked through how to locate a button that’s on the biogas buses. By pressing this, the driver is informed that someone with a disability is about to board. 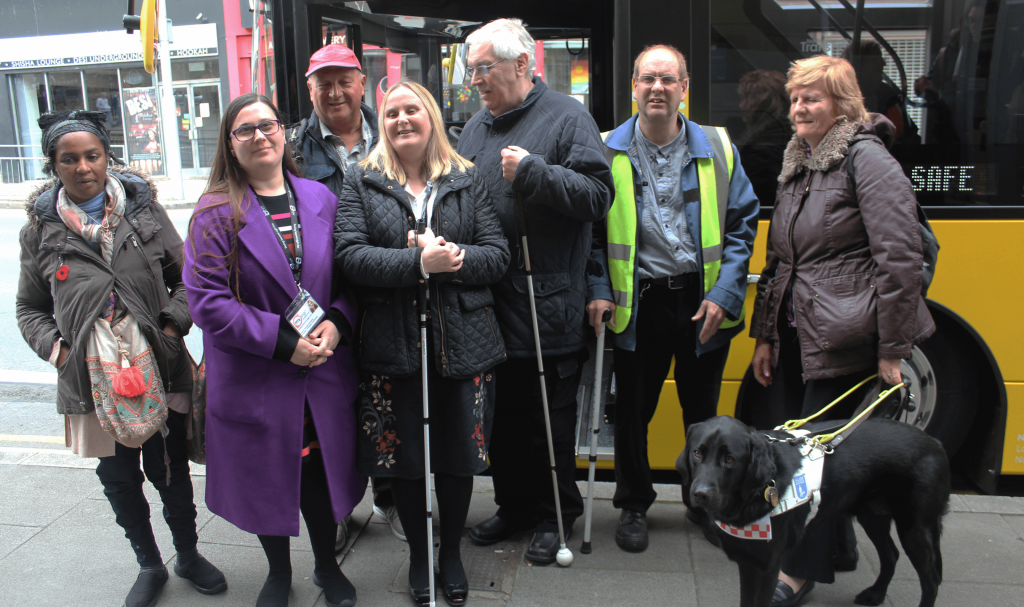 The final session was at Harpenden House, which is a community centre for adults and children with learning difficulties. On top of the information that the other groups were taught, the group had other areas they wished to cover. One priority for them was how to stay safe at bus stops in the dark. They were taught that they can do this by waiting in the bus shelter or under a streetlight. It was also reiterated to this group, that if they ever feel intimidated, they can talk to the bus driver. 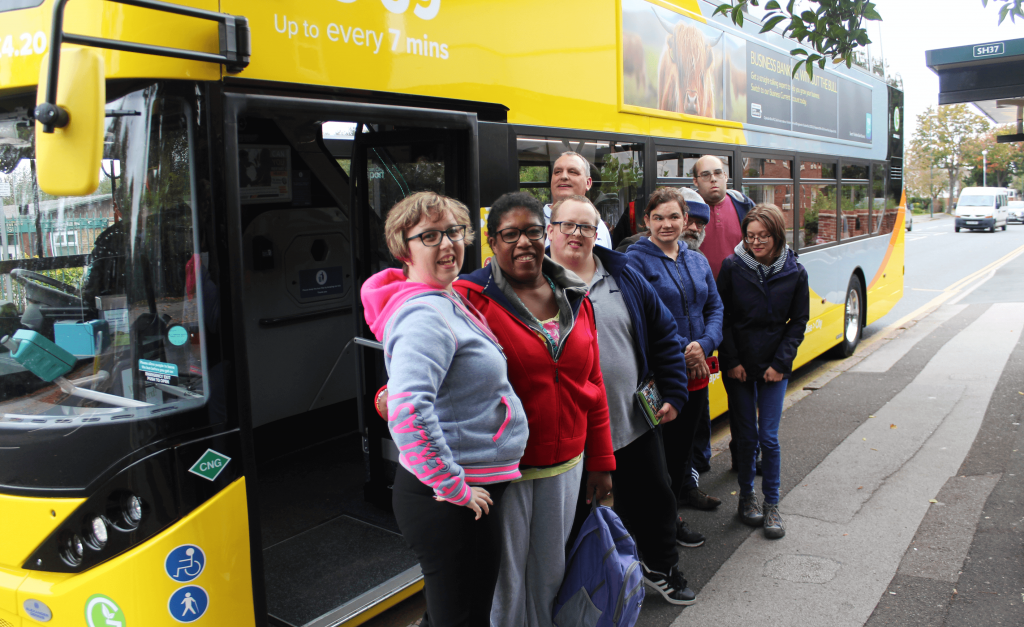 Throughout the day, we handed out badges for the upcoming ‘please offer me a seat’ campaign in partnership with NCT and NET. This campaign focuses on hidden disabilities. As part of this campaign, two badges have been created. One badge says ‘please offer me a seat,’ aimed at those who have a disability. The other says ‘happy to move for you’ for those who would offer their seat to someone who needs it. This campaign is yet to launch, but when it does, these badges will be available to pick up from the NCT, NET and Victoria travel centres.