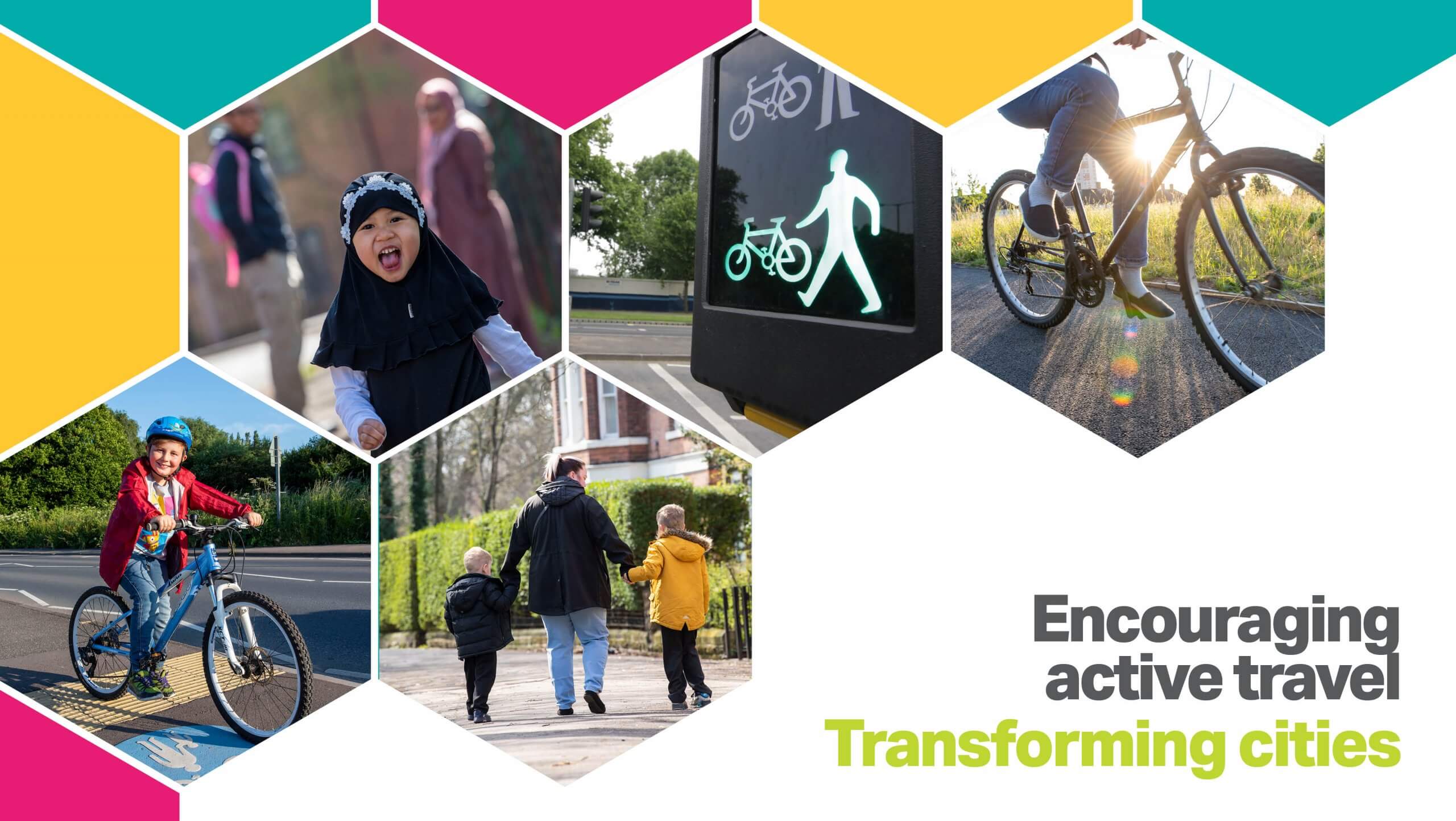 At the same time, this presents the opportunity to connect three of Nottingham’s recently completed segregated cycle routes to the west, east and south of the city, plugging a major gap in the cycle network and cross-city routes.

Cross-boundary cycle routes will be delivered in partnership with Derbyshire, Nottinghamshire and Leicestershire County
Councils to establish continuous high-quality routes:

Improving cycling corridors across the city

We will expand Nottingham’s safe and segregated cycle route network based on the LCWIP prioritisation, including:

We will reintroduce an e-bike hire scheme in Derby, which proved extremely popular. To start, this will focus on providing bikes in local communities and with the university. A citywide bike hire operation in Nottingham including e-bikes is proposed to replace the small scale on street scheme, which is currently focussed on the two universities and the city centre. The service in both cities will be operated by the private sector with major funding of the bikes and infrastructure from the Transforming Cities Fund. 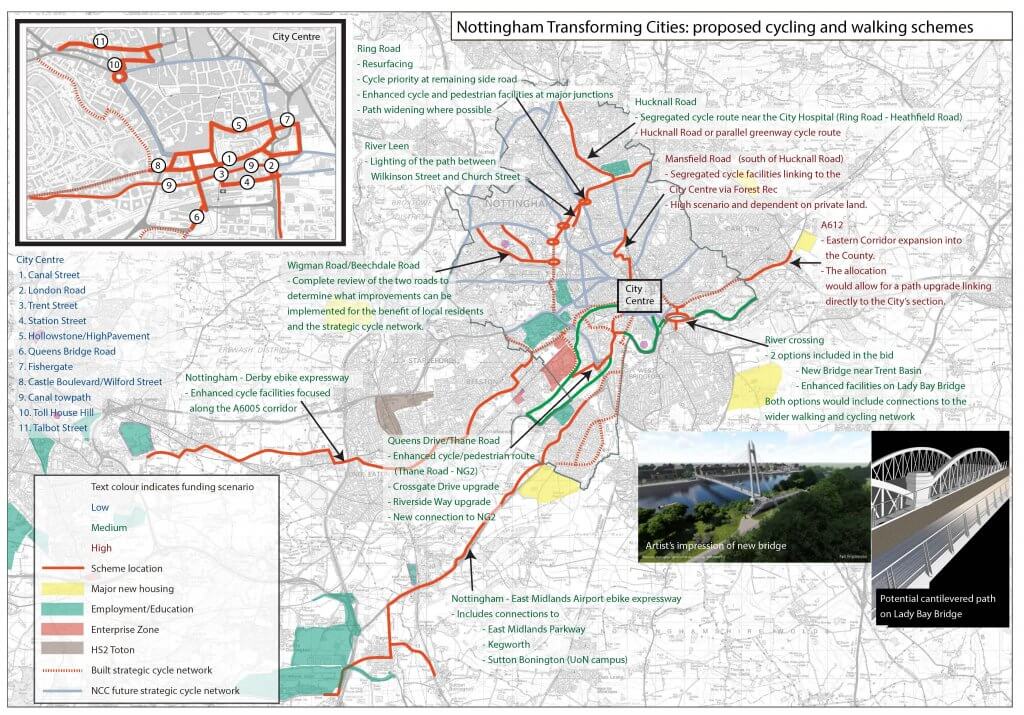 The Broadmarsh area public realm improvements will create a more inclusive and accessible street environment benefitting a significant number of people who regularly traverse Nottingham’s central areas from the transport hubs towards the employment and retail zones. Soft landscaping works around the new college are now substantially complete and works are progressing to install lighting and street furniture on Carrington Street, and the next phase of works on the southern section of Middle Hill has now commenced. Design work on Collin St is being considered in line with the wider redevelopment of the site and will be progressed throughout 2022.

Introduce new coach parking arrangements in the City Centre to encourage coach travel to Nottingham Castle and amend vehicular access on Friar Lane to improve pedestrian priority. Coach parking bays and new way finding signa were introduced ahead of the Castle opening in the summer. Some additional paving works are proposed on Hounds Gate and will be delivered next year.

New pedestrian and cycle crossing over the River Trent

A new bridge is proposed over the River Trent for pedestrians and cyclists.  As part of the project new and enhanced footpath and cycle connections will be provided, linking the new bridge to Colwick Park and West Bridgford. Following an options assessment, the preferred location for the bridge has been identified at Trent Basin, and public consultation ran throughout November including an on-line survey.

Delivery of cycle improvements along the A6005 corridor, linking into Nottingham City Council’s western cycle corridor (N3) and along the A453 corridor linking Nottingham to East Midlands Airport. Preliminary design works are progressing. Awaiting Nottinghamshire County Council Committee Approval to enable consultation to commence within the County area.  Discussions have also been arranged for early December to discuss consultation for the route in the Leicestershire area.

An expansion of the Broadmarsh area cycling facilities to connect to the wider strategic network and facilitate cross city (east – west) movements by bike. There are several phases of works which are to be delivered on a rolling programme. The first phase of works and now complete and works to Wilford Street junction have now finished. We are now completing the route along Canal Street between Trent Street and London Road.

A jointly-procured public bike hire scheme that delivers a sustainable network of docked and dock-less bike hire locations across the Derby and Nottingham urban area.  Comprising both conventional and e-Bikes, with hire locations targeted in central areas of both cities in locations where cycle network improvements are delivered, around transport interchange ‘hubs’ and major employment/education sites that may generate in both cities. Discussions are taking place with the City Council’s Legal and Procurement teams to develop the Tender, and the contract is likely to be awarded in Spring 2022.

Works in the vicinity of the park and ride are under construction. Design work continues on the other sections.

To improve conditions along Beechdale Road, Wigman Road and Hollington Road (including the roundabouts) to make the cycling and pedestrian facilities safer and more attractive for commuting and leisure trips. Public consultation took place in October and is now complete.  Feedback responses have been collected and are now being analysed.

Cycle improvements along the Hucknall Road corridor from Valley Rd to Moor Bridge, and a section of Mansfield Road south of the junction with Hucknall Road and the associated routes through to the city centre. Construction is currently underway on Hucknall Road between Heathfield Road and Tring Vale). Once complete the section linking through to the Ring Road will commence in late November and be complete before Christmas. Other sections of the route are currently being designed and will be delivered next year.

Improved cycling facilities along Carlton Road, which forms part of the City’s “Strategic Corridor N13”. Whilst facilities for cycle traffic exists on both of these routes they are largely painted lines, broken by parking / bus routes.  Consideration is to be given to what improvements can be delivered on Carlton Road along with quieter alternative routes. The preliminary design has been developed and communication material is currently being developed for a consultation exercise in late 2021/early 2022.

Footpath widening along Valley Road between Hucknall Road and Mansfield Road is underway and due for completion early in the New Year.

The project is looking to widen the towpath under bridge 3 (London Road)  and is investigating opportunities to provide lighting Wilford Street and London Road. The Canal and River Trust have completed a navigational risk assessment and are now consulting with boaters about the widening of the towpath.

Repairs are proposed to the path so that it can become an adopted right of way, and look to provide lighting at the following locations:

Ecological surveys have been undertaken to confirm that the installation of lighting would not have any adverse impact on bats. The specification is now being developed to select a contractor to undertake the lighting works.

Cycle improvements along Daleside Road between First Avenue and Private Road No. 1 Detailed design is ongoing, with a view to completing this phase in late 2021/early 2022.

View the latest news for our transforming cities projects.

Back to Transforming Cities