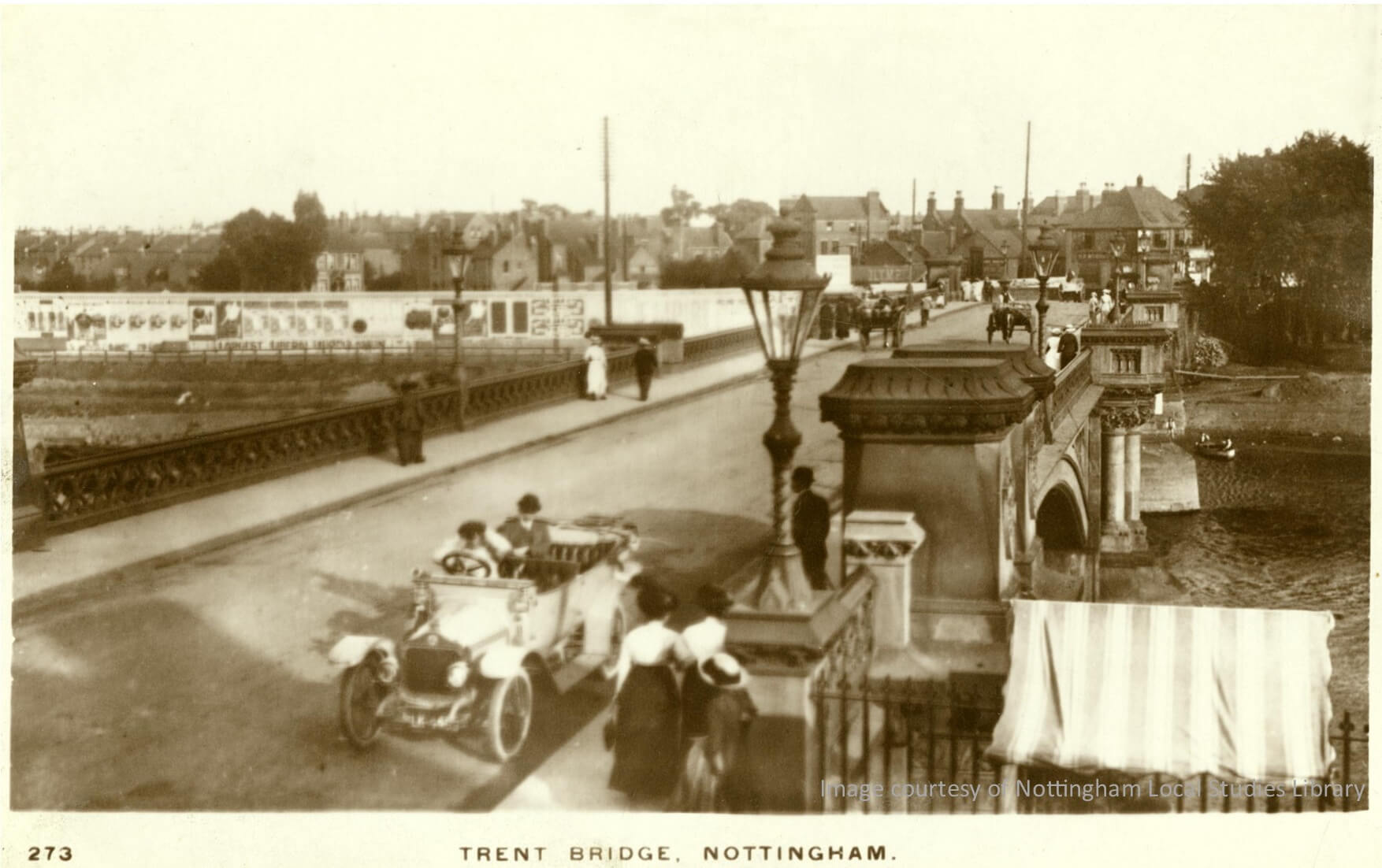 The Trent Bridge we know today opened on 25 July 1871, but there has actually been a bridge in this location for more than 1,000 years!

Alistair McGrady, a Senior Transport Planner at Nottingham City Council, is a history graduate with a particular interest in local history. Here he tells us a little more about the bridge and its surroundings, with thanks to the Nottingham Local Studies Library/Picture Nottingham for historic photos and additional information.

1871 seems to be the accepted date for its opening. People often think it’s earlier because of the flood dates inscribed on the wall, but these were transferred over from the original bridge.

This photo shows the original stone bridge, in around 1868 or 69, possibly with the local civic officers who were commissioning its replacement – the new bridge was built alongside between 1868 and 1871. 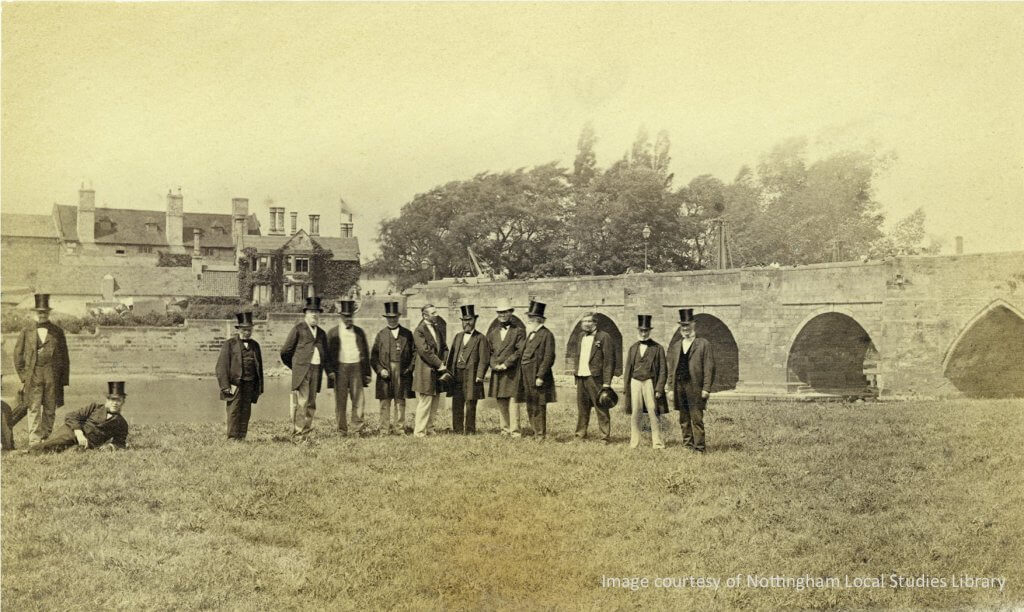 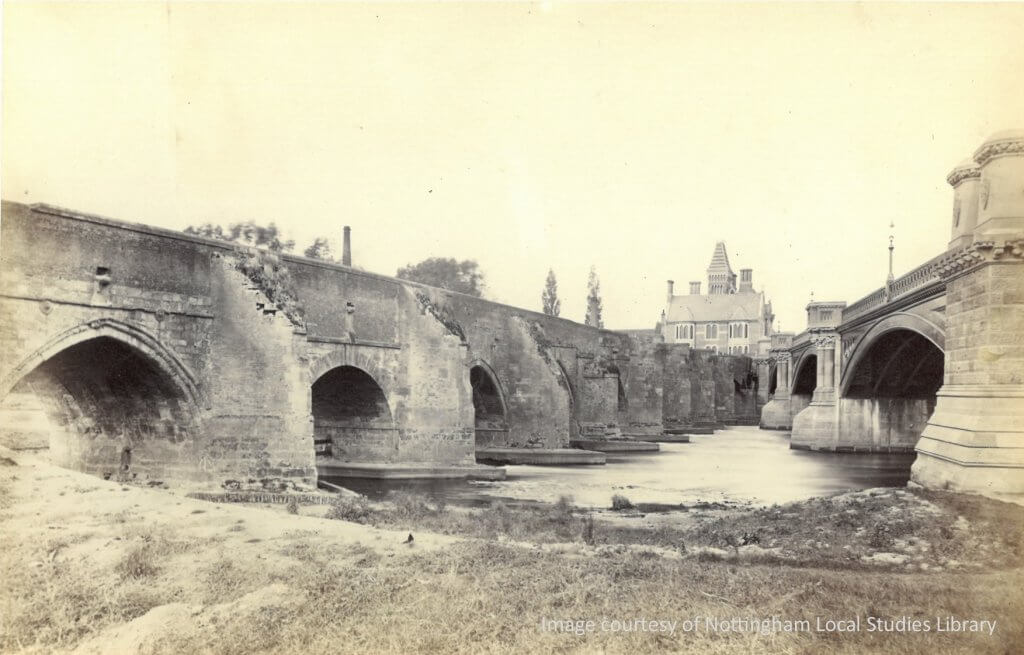 This photo shows the laying of the memorial stone. 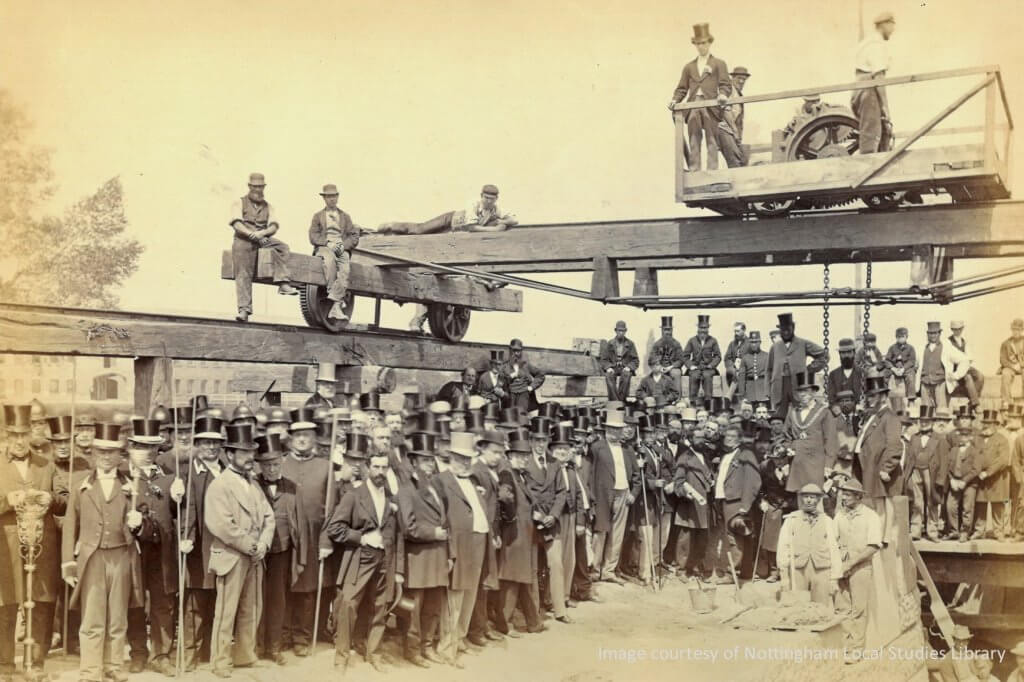 The river has frozen a few times over the centuries, with the most recent being in January and February 1895. The river was frozen solid for 10 days! 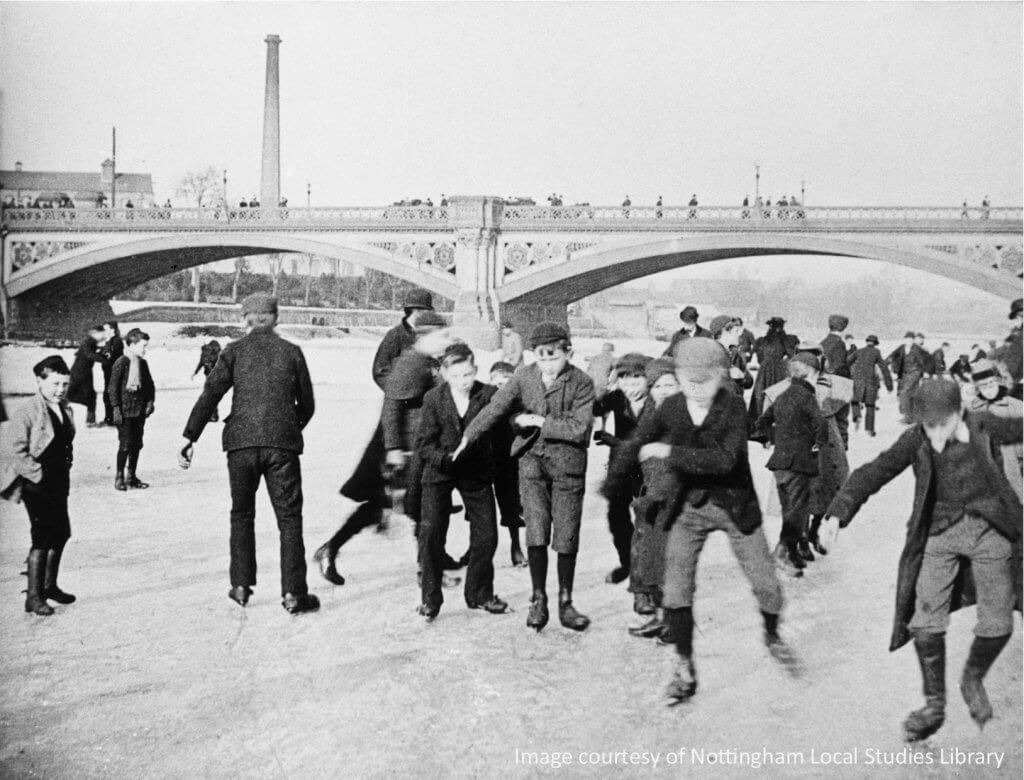 In the drawing below, you can see huge chunks of ice on the banks from the Great Frost in the following year, in 1896.  Against the southern pier can be seen a fire burning. Many were lit on the surface of the frozen river. This frost was one of the most severe in living memory and it lasted for several weeks. 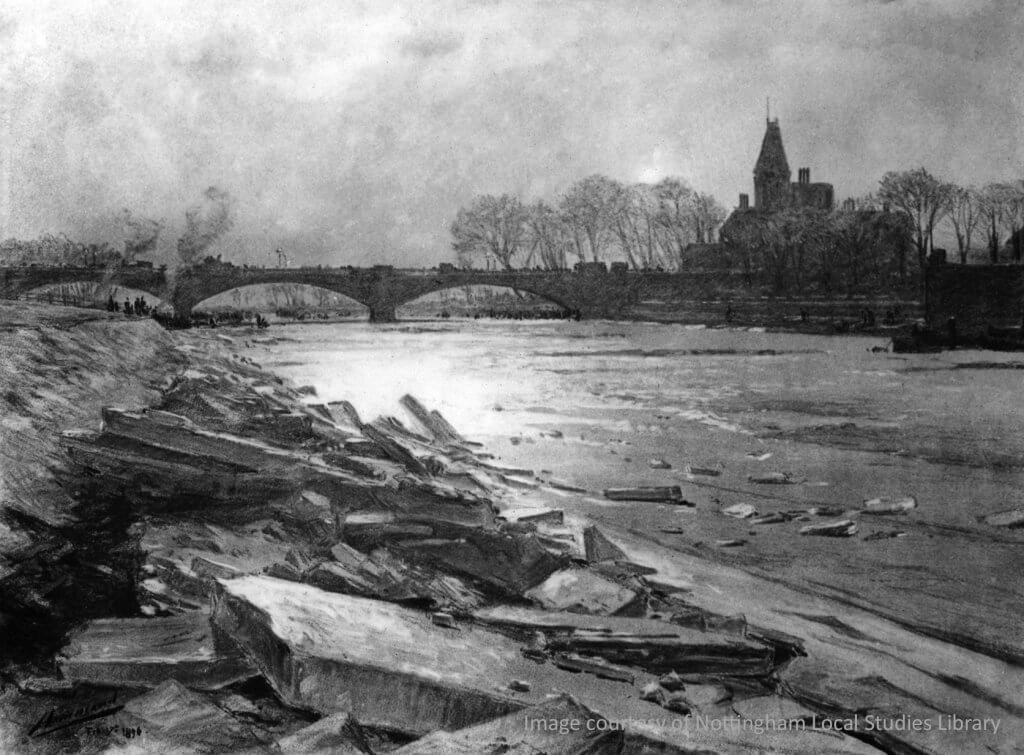 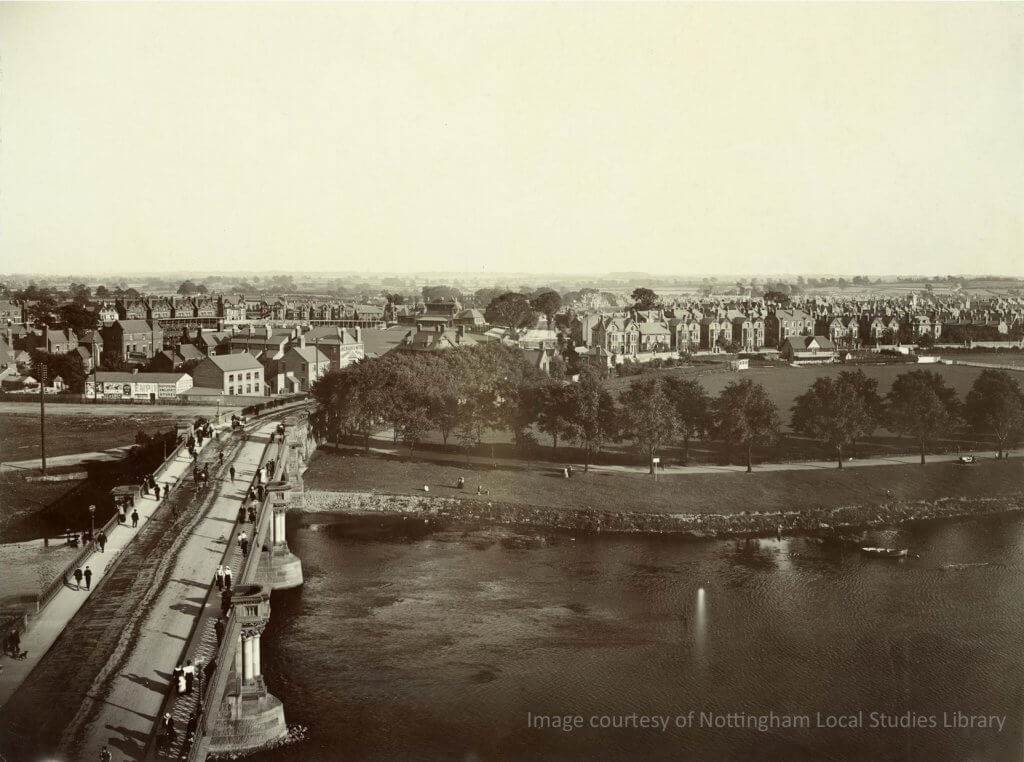 Here you can see the bridge being well used by pedestrians in around 1901, looking toward the cricket ground, with the future site of County Hall to the right of the photo. The bridge was also well used by people going to cricket matches and football games – much as it still is today – as can be seen in the crowds of people in this image from the early 1900s. 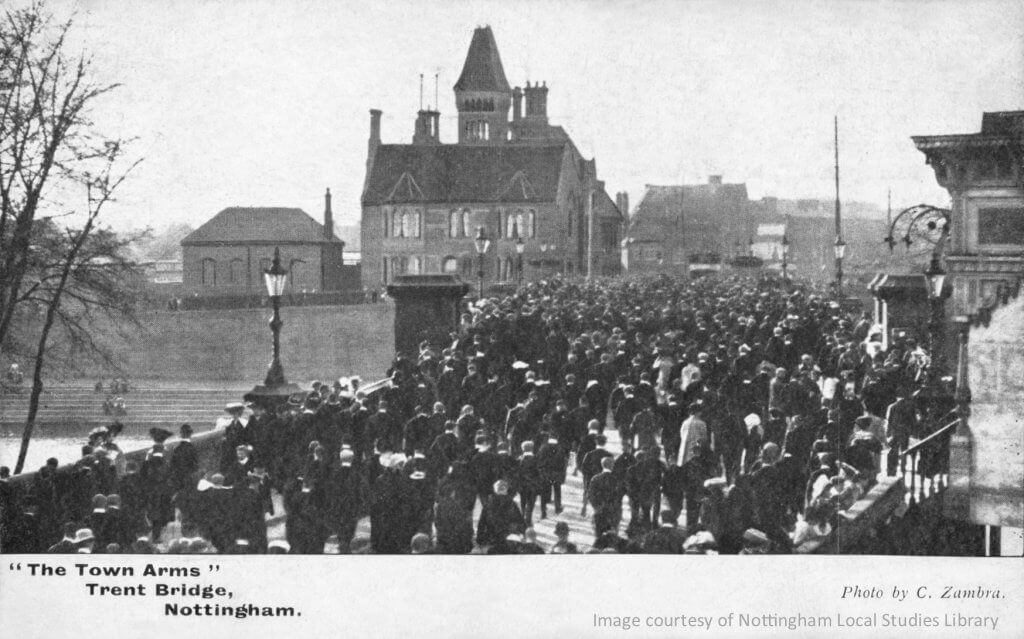 This photo from 1910 shows how little the bridge has changed since it was built, with the original features having been maintained. The Town Arms pub still exists today, now operating as the Brewhouse. 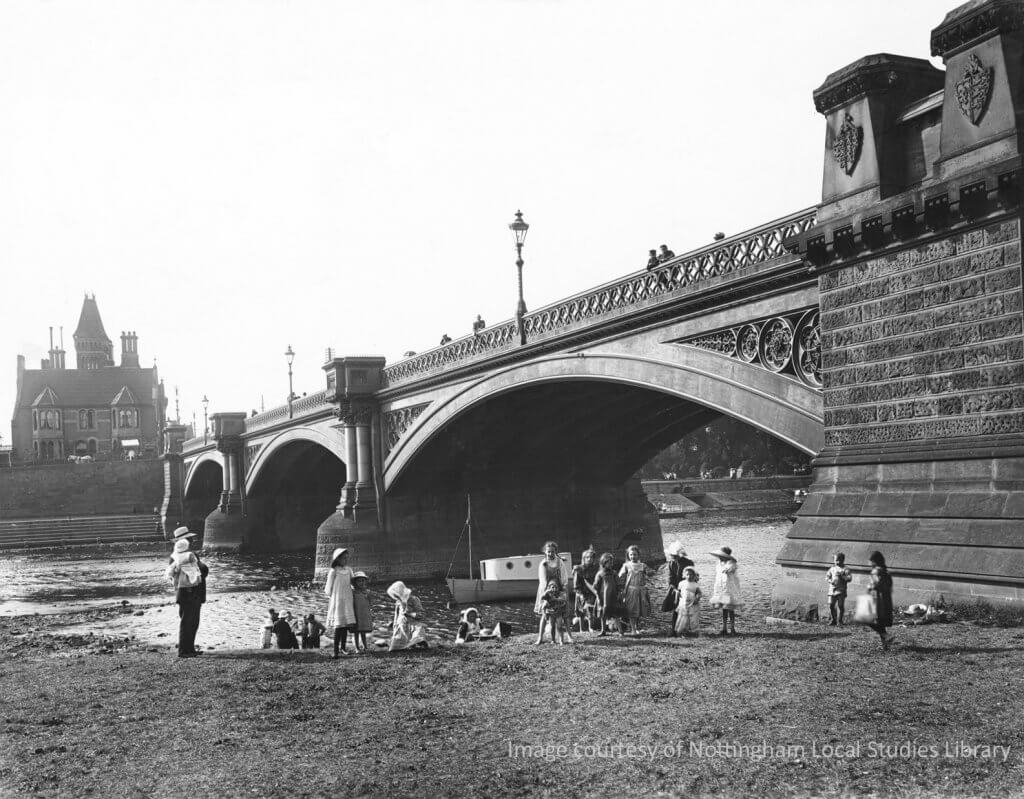 Lots of landmarks around the bridge can still be seen today. In this aerial photo you can see the Turney Brothers leather works on the north bank of the river (below as you look at the photo). The factory closed relatively recently, in 1981. The main building is still there, and has been converted into flats. On the West Bridgford side of the river you can see the cricket ground and football stadium. 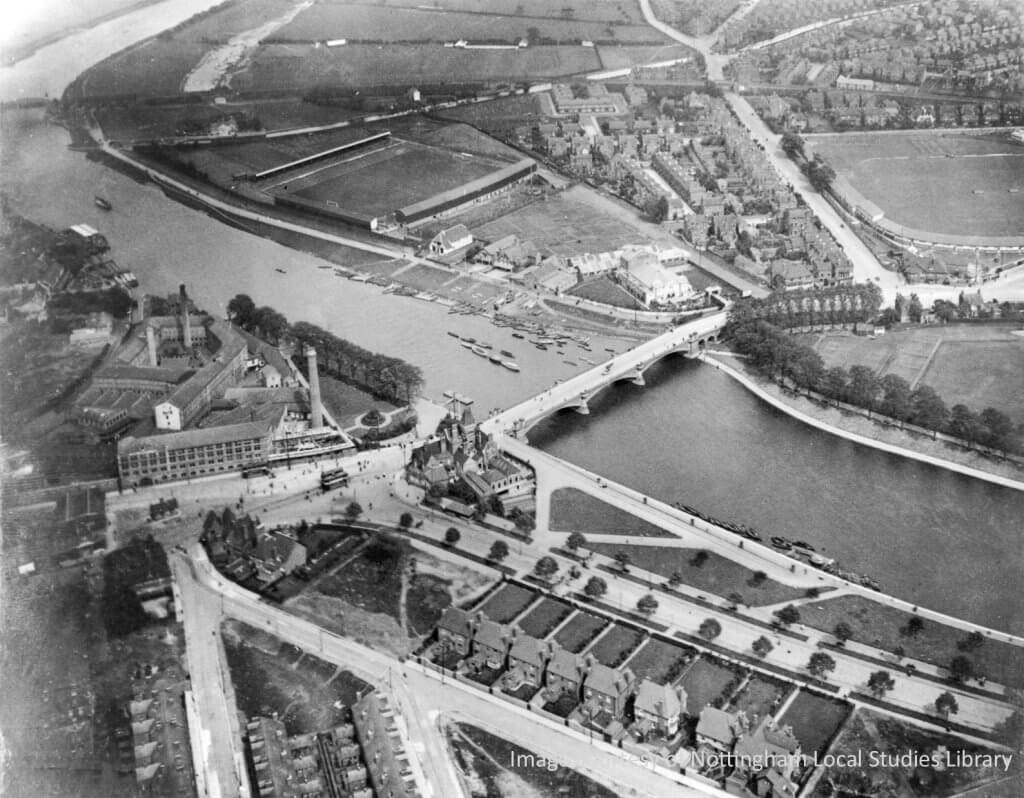 These next photos, from 1926, show the only major change to the bridge since it was built, as it doubled in size. You can see the new structure being put up in the river, and the later picture shows it pretty much as it is today, although there is no central reservation. 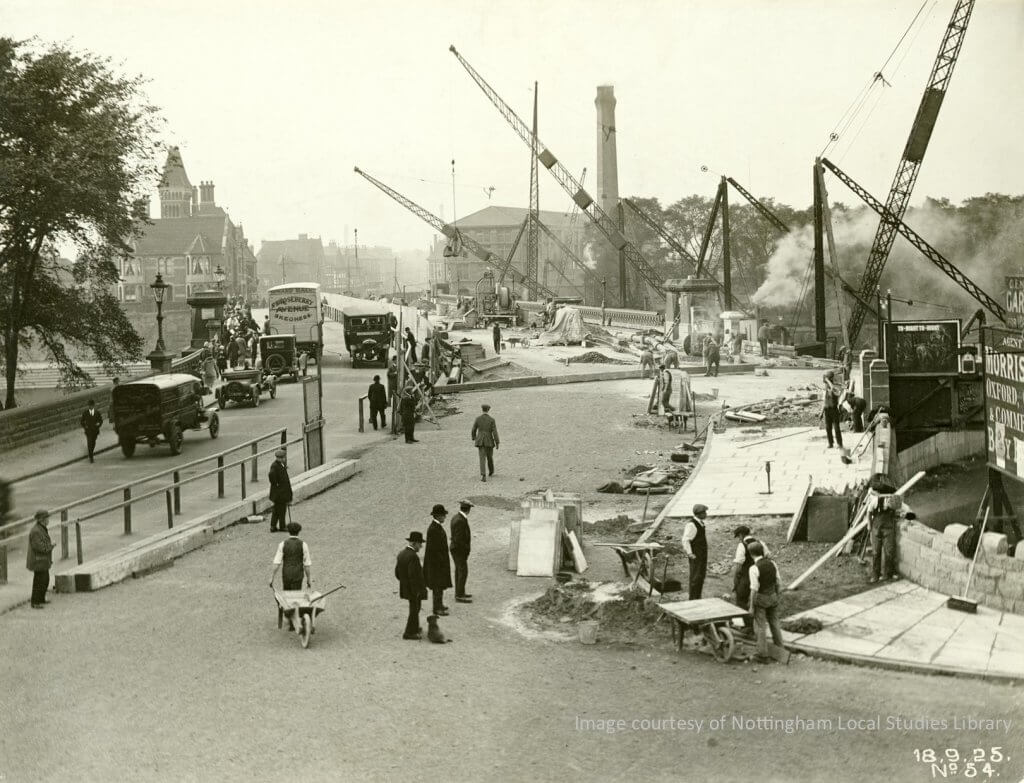 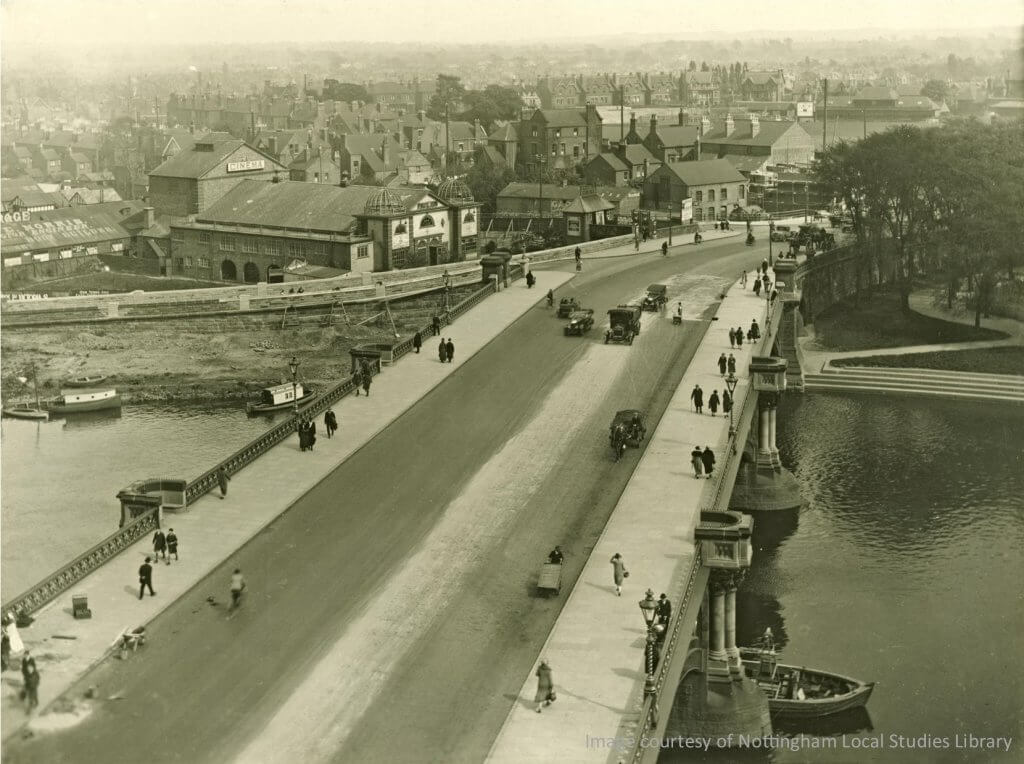 In 1947 there was heavy flooding and the Trent overflowed to Nottingham Station in the north and the Wolds pub (now next to Asda) in the south. The height and year of all major floods are marked on the wall of Trent Bridge which can be viewed of the flood from the path under the bridge on the north side of the river. The photo below shows the extent of the flooding in 2000. 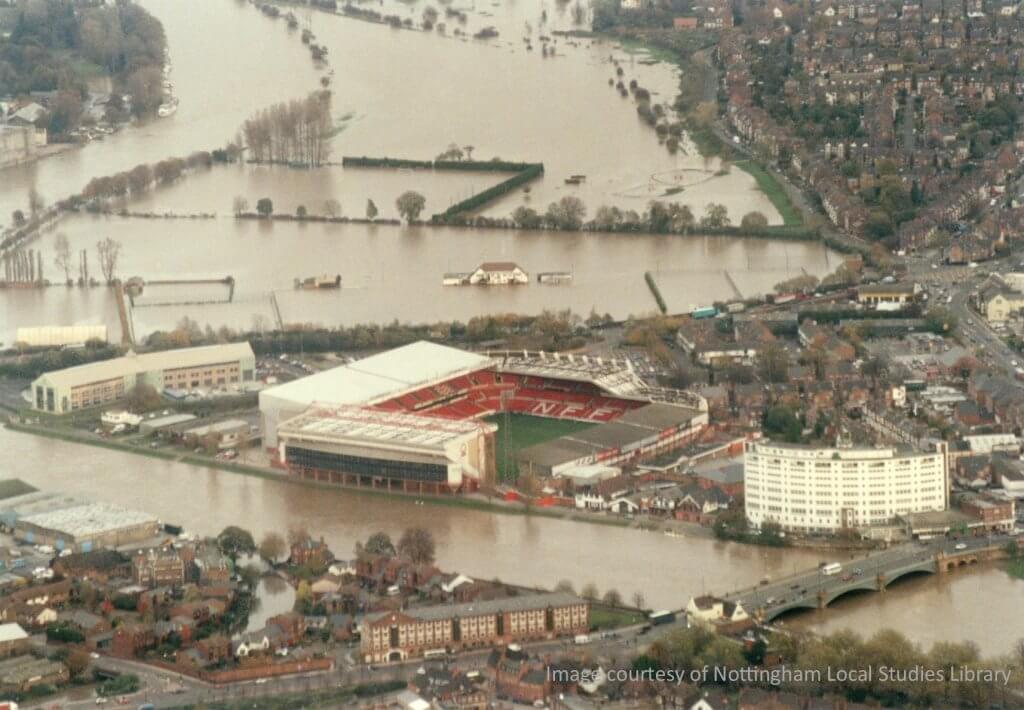 The old Trent Bridge Police Station and Police House used to be located on the south of the bridge but was demolished in around 1954 to widen the road approaching the bridge. The Police House actually had parts of the arches of the original bridge in its back garden and the police officer who lived there covered it over with wire mesh and kept chickens in there. You can still see those remains today when you cross over from Radcliffe Road to County Hall in the middle of the traffic island.

More recently, the bridge has featured in some memorable events. In 1977 I stood on the bridge with thousands of others to see the Queen and Prince Philip as part of her Silver Jubilee tour. In November 2002, the Nottingham Princess Pleasure Cruiser unfortunately crashed into Trent Bridge during high water levels, and in 2010 a number of people with the title of ‘Honorary Freeman of the City of Nottingham’ exercised their right to march sheep over Trent Bridge.

A couple of years later, it was on the route of the 2012 Olympic Torch Relay. Normally the path on the bridge is packed with spectators watching the annual firework display held on the Saturday evening of the Riverside Festival in early August.  Hopefully this popular event will return in 2022 after the coronavirus pandemic has caused its cancellation this year and last.

Following its 150th birthday, Trent Bridge will continue with its main function of being a vital link between Nottingham and the south of the county, carrying nearly 50,000 vehicle movements every day.