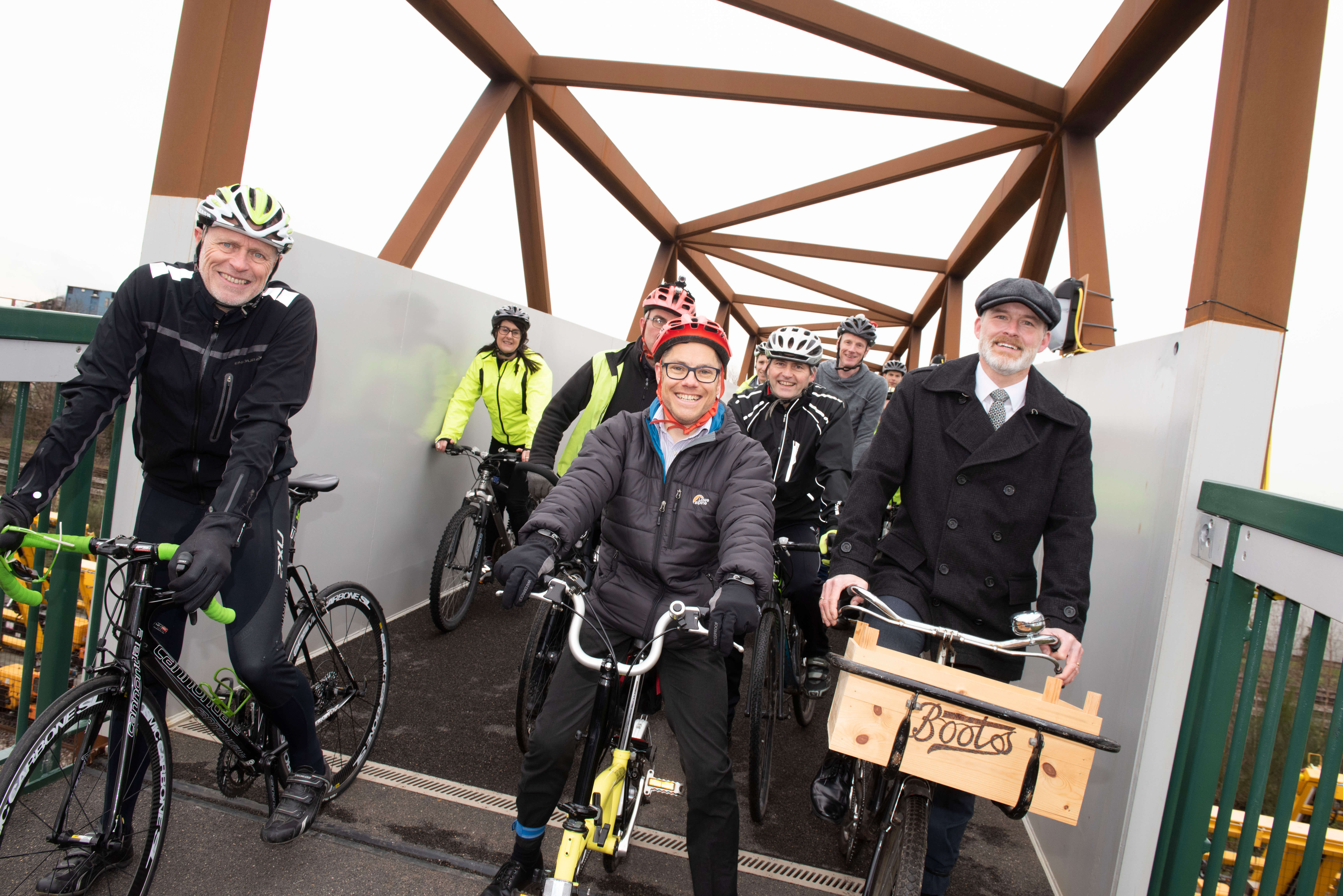 The new route – which includes a 50 metre bridge over the railway – better connects a number of existing and planned major employment sites, linking Lenton and the Boots site directly with Nottingham Science Park and University Boulevard.

Led by Nottingham City Council, the £6m project has been grant funded by the D2N2 Local Enterprise Partnership to upgrade pedestrian and cycle links between the city centre and the Boots site, part of the Nottingham Enterprise Zone. It will benefit employers and colleagues, who can now take advantage of a quicker cycling route and more public transport options.

Council Leader Jon Collins said: “This path halves the journey south of the railway from the bus and tram stops on University Boulevard, as well as making journeys for cyclists more convenient.

“But this improvement is bigger than a new footpath and cycleway. This wider transport offer will support further development in the enterprise zone, encouraging business growth and supporting our local economy.”

The ‘Dr Stewart Adams Bridge’ has been named in honour of the scientist whose career at Boots spanned over 45 years during which time he led the team that discovered ibuprofen, one of the most effective and bestselling anti-inflammatory painkillers in the world. In 2008 Adams was awarded with an honorary degree from the University of Nottingham, making the naming of the new bridge, which links academia and industry, even more poignant. In 2013 he was made an Honorary Freeman of the City of Nottingham.

With thousands of people accessing the Boots site every day, the path will create a new way for people to get to work and access the site, by extending a link to the tram and bus services from University Boulevard.

Crossing the Midland Mainline, it will link the Boots site directly with Nottingham Science Park and University Boulevard. It will also improve access to the University of Nottingham, the Queen’s Medical Centre, and existing cycle routes, such as the Western Cycle Corridor. 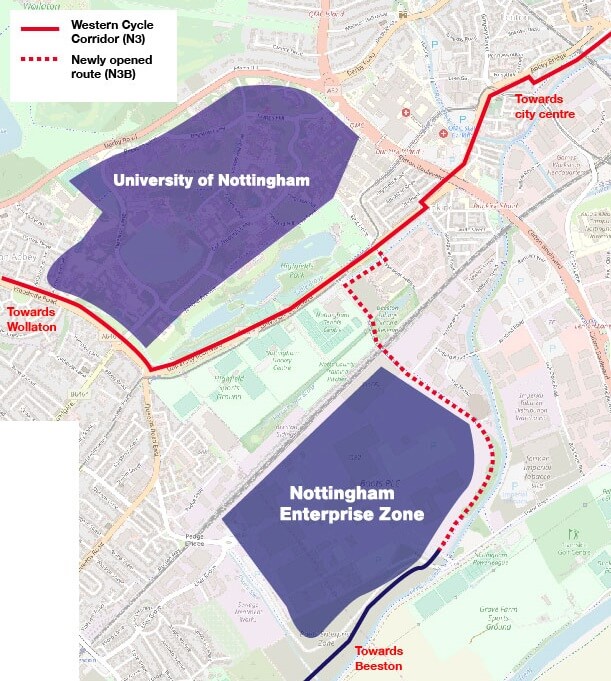 Paul Dunne, Transformation Director, Boots UK, said: “Our ambition has always been to improve access to the site and the opening of the new footbridge and cycleway realises that vision. The route provides a simple, effective link to the tram system and makes walking or cycling to the Boots site for colleagues easier than ever.

“It is not only Boots colleagues that will benefit, the route will provide better access from the University of Nottingham to the sports facilities and a new route into the Nottingham Enterprise Zone.” 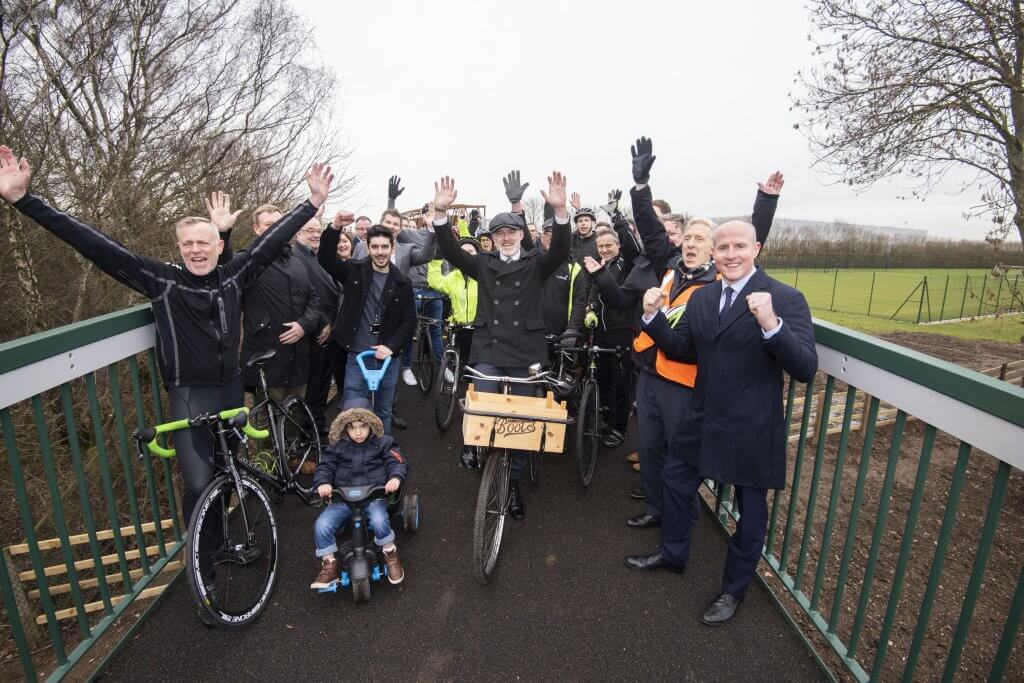 Construction firm Eurovia employed Hucknall-based Briton’s Fabricators to build the bridge offsite, before it was lifted into place over six hours using one of the largest cranes in the country. The constructors have used weathered steel to reduce future maintenance costs.

The new footpath and cycleway runs from University Boulevard, along a new road between the tennis centre and land earmarked for future science park developments, to Thane Road and the Beeston canal.

New development is already under way at the science park, where work will start shortly on a new building creating 35,000 square feet of Grade A office space for innovative science start-ups, or expansion space for growing firms looking for research and development facilities. The building will include a prominently positioned café for networking across the park, meeting rooms and outdoor seating located on the pedestrian route between the science park and the nearby tram stop.

In October 2016 Nottingham City Council was awarded £6m from the D2N2 Local Enterprise Partnership to upgrade pedestrian cycle links to connect the Boots site to the city centre and surrounding areas, including in Beeston delivered by Nottinghamshire County Council.

In addition Boots gave a planning contribution for their enterprise zone housing and jobs development.