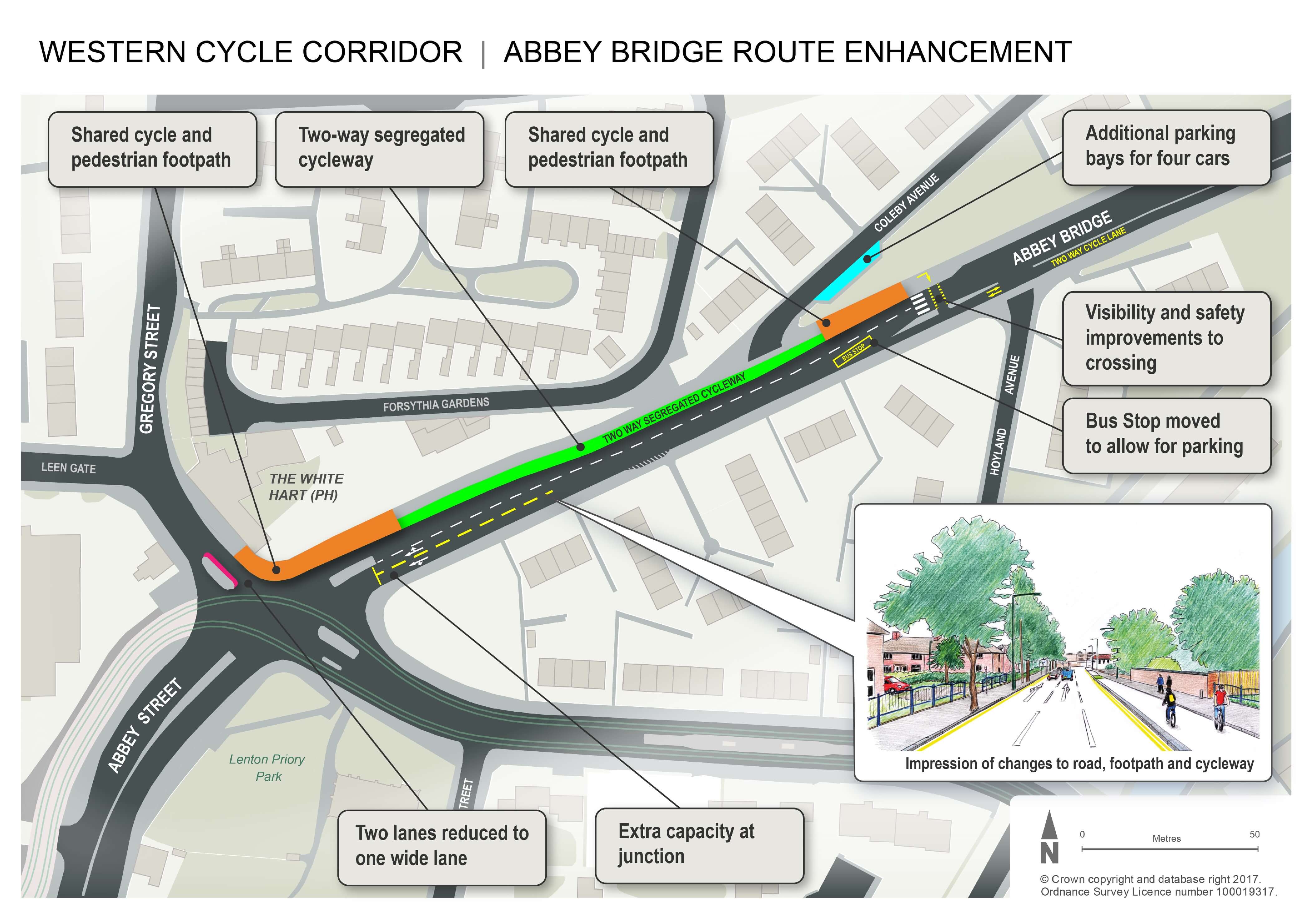 Work will begin on 15 January for 12 weeks on Abbey Bridge to restore on-street parking provision and improve cycling facilities at the Abbey Bridge/Gregory Street junction.

Following concerns raised by local residents about parking being lost from the construction of an off road cycle path, the council will move the cycle path to the opposite side of the road in order to restore the single yellow line along Abbey Bridge.

As part of these works, increased capacity will be added to the Gregory Street junction, to improve traffic flow. Additional parking spaces will be created on Colbey Avenue, and cycle safety will be improved at junctions and crossings.

Details of the scheme:

The outbound cycle path will be moved to the opposite side of Abbey Bridge to make a two way track on the northern side of the road. The cycle crossing at the junction with Gregory Street will be improved and the island widened. This will involve reducing two lanes to one for drivers. The parallel pedestrian and cyclist crossing near to the junction with Hoyland Avenue will be amended to increase visibility and safety.

An additional ahead lane will be added to the junction with Gregory Street to increase capacity for cars leaving the city, this should help to keep traffic moving during the evening peak. Four additional parking pays will be created on Coleby Avenue and the single yellow line on Abbey Bridge reinstated, so residents can park as they did before.

How will this affect traffic and residents?

Construction will begin on Monday 15 January for 12 weeks. Normal working hours will be 8am – 4pm, to help keep Nottingham moving during the evening peak. There will be lane and road closures at the end of March for resurfacing, these will be completed overnight or outside peak hours, advance warning signs will be in place when exact dates are confirmed. Traffic will continue to operate as normal and the council will ensure access is maintained to properties at all times.

Councillor Sally Longford Nottingham City Council Portfolio Holder for Neighbourhood Services and Local Transport said: “We have listened to concerns from local residents about the loss of parking on Abbey Bridge after the construction of the off road cycle path, we are not only restoring the single yellow line but also adding additional parking on Colbey Avenue.

“The works will increase capacity to the Gregory Street junction, keep traffic moving and improve cycle safety at junctions and crossings.

We have two counters in the cycle track along that stretch of road; one at Abbey Bridge roundabout and one on Abbey Street near the QMC junction, these counters have been recording the number of cycle journeys since October 2016. Both counters show a 15% increase in cycle traffic based on the same month in 2016.

Typically on a weekday, we see over 700 cycle journeys along Abbey Bridge with most of these being commuters during the morning and evening peak. We expect this number will increase over time, as more people feel confident and safe cycling to and from the city.”