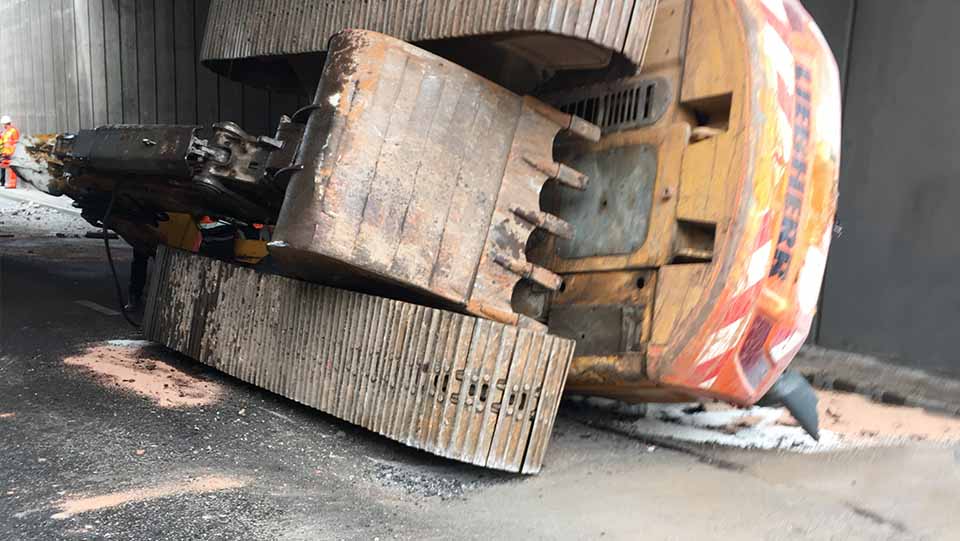 On Tuesday 5 June at roughly 8am a digger on the back of a low loader lorry hit a bridge on the A52 near the QMC. Thankfully, no one was injured but the incident had major knock on effects for traffic in the city and caused disruptions all day until the road reopened at midnight.

Here’s what went on behind the scenes…

At 8.10am our Network Management team is instantly alerted to the incident via the cameras in the traffic control centre. Due to the time, location and severity of the incident it was clear this would cause major delays so one of our Traffic Officer was sent to the scene to manage the traffic.

A key priority when incidents like this happen is to get Nottingham moving again as soon as it is safe to do so. Highways England own the bridge, but the road underneath is the responsibility of Nottingham City Council – so it was vital that both authorities worked together to assess the damage.

Traffic Officers from both Highways England and Nottingham City Council were on site to assist the police and help where possible with congestion and traffic movement. Officers kept live reports coming into the control centre on a regular basis.

By 8.30am our Highways Team had set up signed alternative routes, to try to alleviate some of the pressure on the QMC/Derby Road junction and help people get to work. Messages about the alternative routes were broadcast on social media and local radio, and the bus companies announced diversions to affected routes.

By 11.30am Highways England had assessed the damaged bridge and deemed it safe to reopen the road above, now our team could safely begin to assess the damage to Middleton Boulevard underneath.

Initial assessment from our Highways engineers showed that the road would need to be resurfaced, but first there was the small matter of the digger in the way! A crane was ordered to remove it, and the digger was broken into smaller pieces to make it easier to lift. Our Highway maintenance team ordered in the required materials and were primed and ready so they could start the resurfacing work as soon as the road was clear.

By 2pm it was clear that due to the damage on the road, it was not going to be open in time for the evening rush. It was time to amplify the message – and advise people to plan alternative routes home if possible. Calls were made directly to the biggest employers in the city to get the message out to their staff.

At 4pm the roads started to get busier as people began to make their way home. Our traffic control centre was on hand managing the road network to help people get through the evening peak.

Shortly after 5pm, the digger is removed, so resurfacing work can begin. Repairs are completed around 10pm, but the surface needs time to harden before it can be driven on, and the road is reopened at midnight, allowing traffic to return to normal.

When incidents like this happen, our aim is to ensure that repairs are completed promptly and to a high standard. But life in the city doesn’t stop while works take place, so keeping Nottingham moving is also a key priority.

This is the sort of problem solving that the council’s network management team face every day. The aim, to find solutions which allow vital work to be carried out in ways which cause the least possible disruption to motorists.