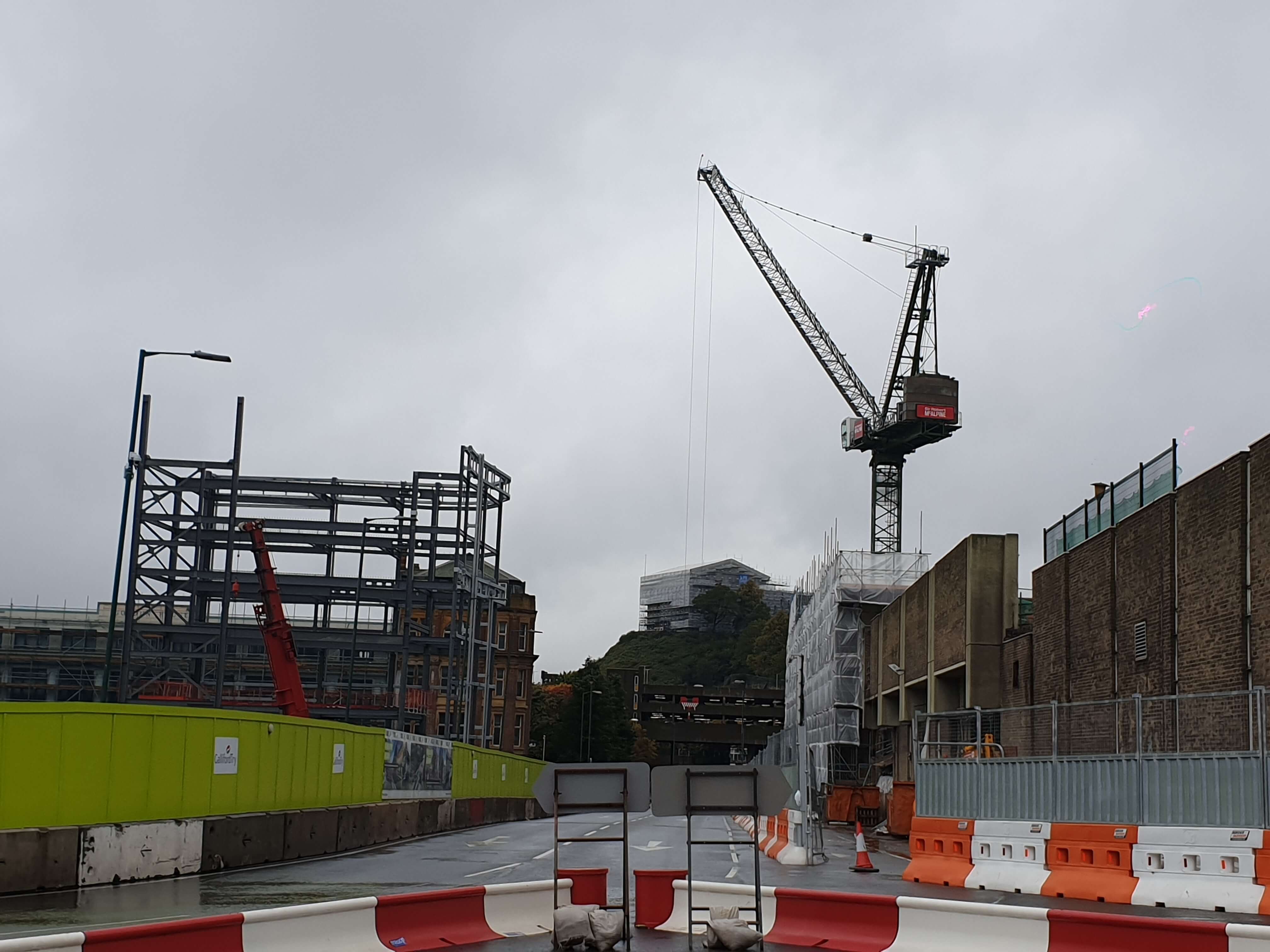 It’s exciting to see the crane in place as works on intu Broadmarsh begin in earnest. The arrival of the crane was a complicated logistical exercise and was always going to cause traffic issues, but with careful planning and on-the-day assistance, disruption was mitigated as much as possible.  Here’s what happened…

The council’s Traffic and Safety team work with intu and their contractor to pick the best time to to install the crane in October, which would require the closure of Collin Street and a section of Maid Marian Way. As this was likely to cause severe disruptions it was decided that the best time would be a weekend so commuter traffic wouldn’t be affected. Finding a weekend in October was difficult, contending with Goose Fair and Forest fixtures, it’s decided to go for the weekend of 10-14 October. The Robin Hood Beer and Cider Festival is on at Motorpoint Arena this weekend, but given the nature of the event, it’s assessed most attendees won’t be driving!

Temporary matrix signs are placed on main roads into the city centre to alert people of the closure four weeks in advance, and a press release goes out at the same time, along with advanced warning in the transport newsletter, and again in the week of the closure, to let the general public know. Social media posts promote alternative routes and diversions around the city, asking people to plan their routes further out to avoid the worst of the traffic. All local businesses and residents receive a letter to let them know about the crane installation.

We also work with the bus companies to ensure that diversions and alternative stops are in place, and to give them time to prepare for potential delays to service. 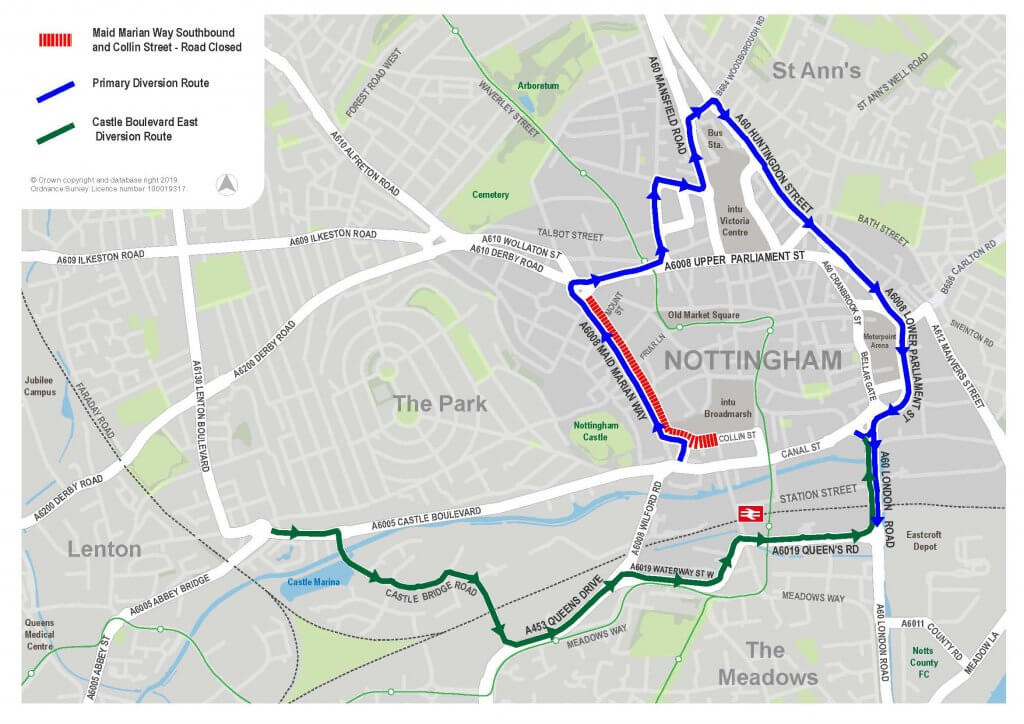 A crane this big arrives on a whopping 30 trucks, and needs two mobile cranes to put it all together! Because of the scale of this, Maid Marian Way is closed from its junction with Friar Lane from 10pm to allow buses and taxis to access the Market Square and allow the crews on site to get the cranes set up to begin work early Saturday morning.

The public are told via social media that the road is now closed and the temporary signs across the city change to announce Collin Street is closed. Once the mobile cranes are set up, the operators head off to get some sleep ready to start their work early on Saturday morning. Due to the size and nature of this work the crane needs to be assembled in daylight to ensure it’s safely in place to start building Broadmarsh.

The crane operators arrive on site at the crack of dawn and start work. In the traffic control centre – which monitors traffic across the city, they identify potential pinch points and manually change the traffic lights to maximise the green lights to allow more traffic to flow. 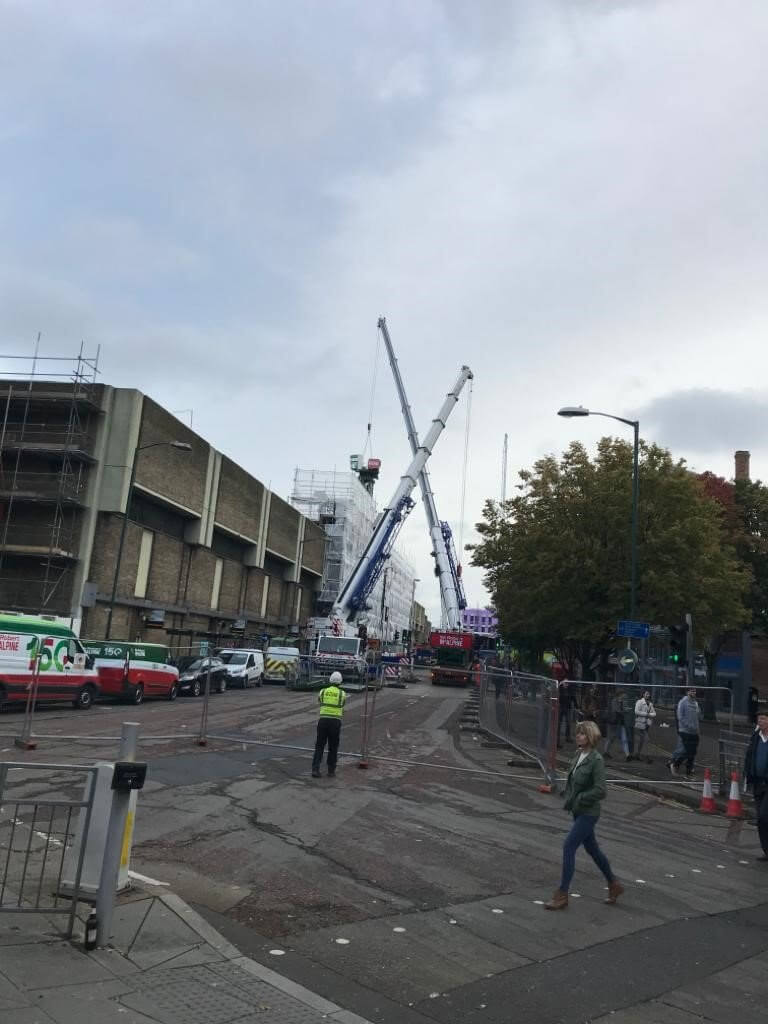 Traffic officers on the ground keep in contact with the control centre and crane teams to monitor progress and identify where traffic might be getting heavy and what they can do to help ease this.

Traffic begins to build around the diversion route. Maximising ‘green light time’ is helping, but some cars are still ignoring road closed signs and trying to go down a route they can’t and having to re-join traffic, causing congestion.

Traffic officers decide to close off some lanes and routes – this might sound counter-intuitive, but by physically preventing people from making dangerous or illegal manoeuvres this ensures safety and means drivers won’t cut corners and push back in to the queue adding to the traffic issues. All vehicles in the queue can continue to move forward rather than stopping and starting to let in queue jumpers.

There are bus delays and NCT adjust some of the stops they will and won’t stop at to help their services run close to on time, and as the afternoon progresses, traffic eases in the city centre and gets back to normal. As darkness falls, the crane operators decide they can’t continue safely constructing the crane and call it a night. The road closure remains in place. 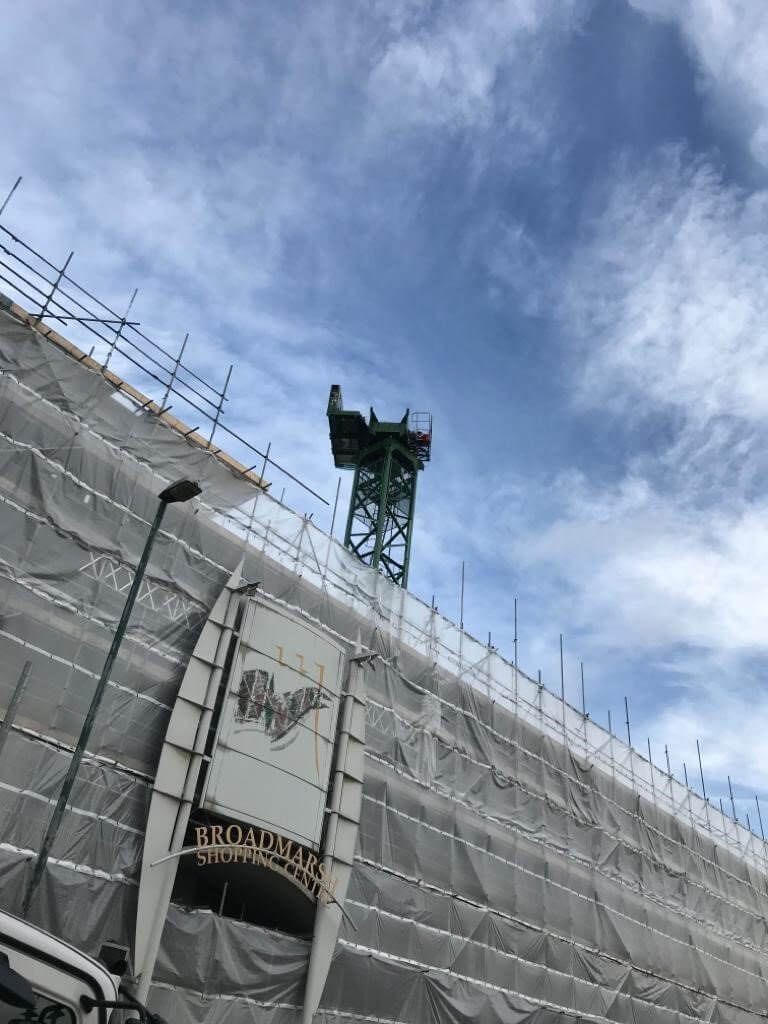 The crane operators arrive on site early and continue their work. As shops open later on Sunday, traffic is a lot lighter, and messages go out in the morning to alert people that good progress is being made, but delays are expected and to please use alternative routes. Work continues – they’re ahead of schedule and want to take advantage of this rather than take it easy.

Around 2pm, good news – traffic is moving easily around the city, and construction of the tower crane is complete. Now, two things have to happen: the mobile cranes need to be dismantled and Collin Street cleared, and the tower crane needs to be tested to make sure it’s safe to start work on the new shopping centre. The contractors are confident the road will be open much earlier than the prediction of 6am on Monday morning.

The test lifts go well and contractors are confirm that the crane is fully installed and the road can be opened. Traffic cones, fencing and diversion notices from Maid Marian Way and Collin Street are removed, and Collin Street reopens at 5.30pm, 12 hours ahead of schedule.

There is always going to be disruption when major transformation projects are underway, Rome wasn’t built in a day and neither will the new Broadmarsh area. Thank you for your patience while work takes place, no one likes sitting in traffic and we are working to manage the disruption, and keep the project on schedule wherever we can.

It will be worth it in the end, a new south-side of the city will be here before you know it! 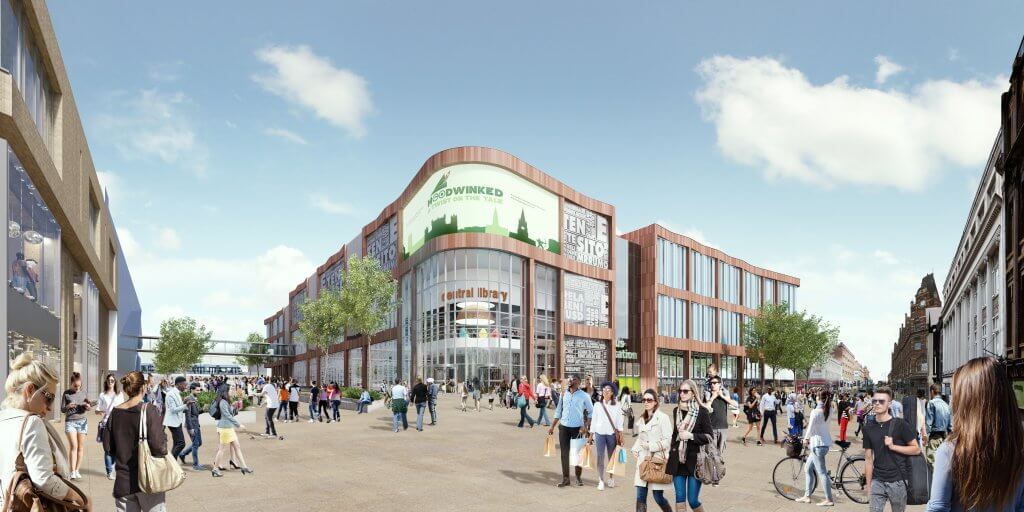 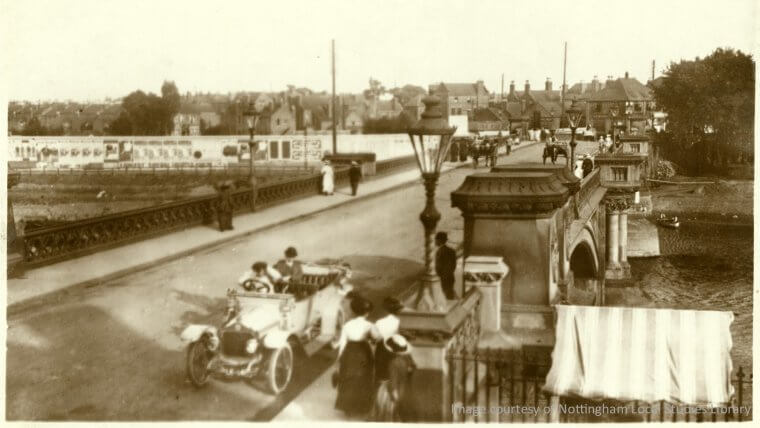 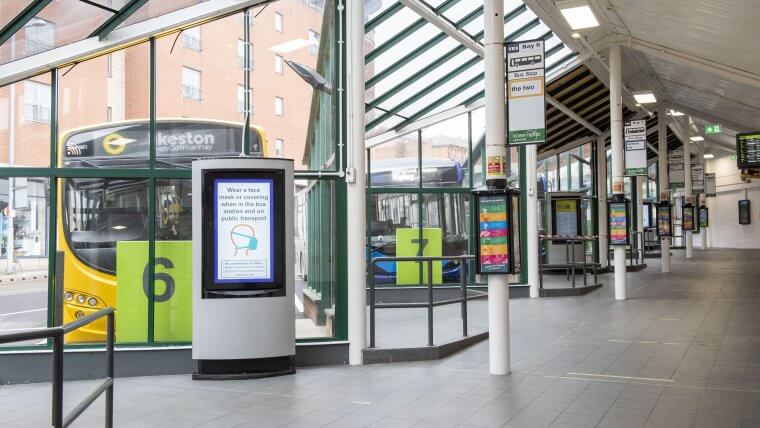 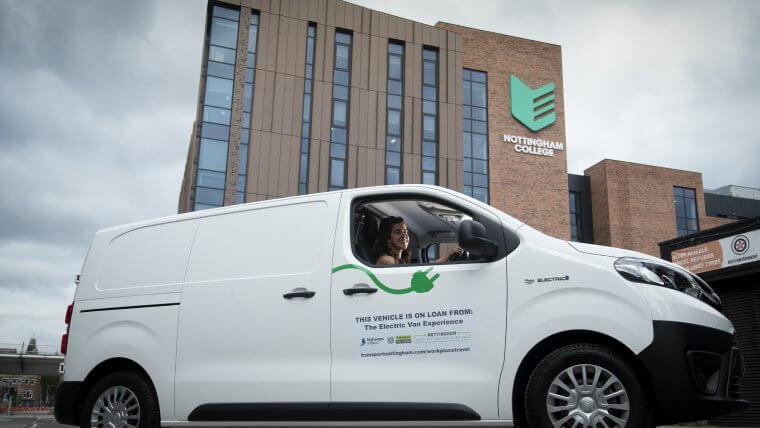